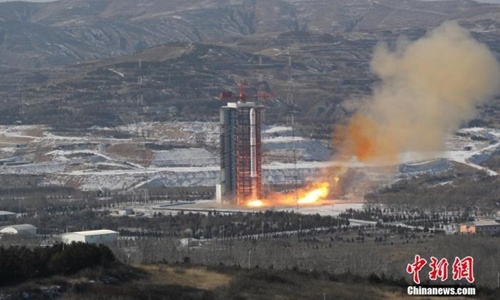 Drag-free control technology blocks external forces that affect a satellite, excluding gravity, so it can remain static and stable, the report said, noting that forces need to be canceled including sunlight pressure and atmospheric drag.

Based on flight data, the new technology reduced external force on Tianqin-1's acceleration by less than 1-400 millionth of the gravitational acceleration, marking a better result than the European Space Agency's GOCE satellite's 1-300 millionth.

The results indicate that external forces have an acceleration effect of less than a human yawn, the report said.

The Chinese technology was successful in reducing displacement from external forces to 30 nanometers, or 1-4,000th of the diameter of an adult human hair strand. It is also better than the internationally well-known LISA satellite's 40 nanometers, according to Science and Technology Daily.

The two results have significant theoretical and practical value in detecting Earth's gravitational field, extraterrestrial objects, and gravitational waves, according to the report.

With this latest achievement, the Tianqin-1 has proven the level of its advanced technology.

The research institute under CASC started conducting related research in 2010, according to Science and Technology Daily, which also noted that China still need time to practically apply the technology in gravitational wave detection.

Initiated by Sun Yat-sen University in South China's Guangdong Province in 2015, the program will eventually consist of three satellites that will form an equilateral triangle around Earth, the Xinhua News Agency reported.