China vowed on Monday to strengthen research and development into cutting-edge and disruptive technologies in the transport sector, and carry out studies of new types of vehicles such as ultra-high-speed trains and commercial airplanes. 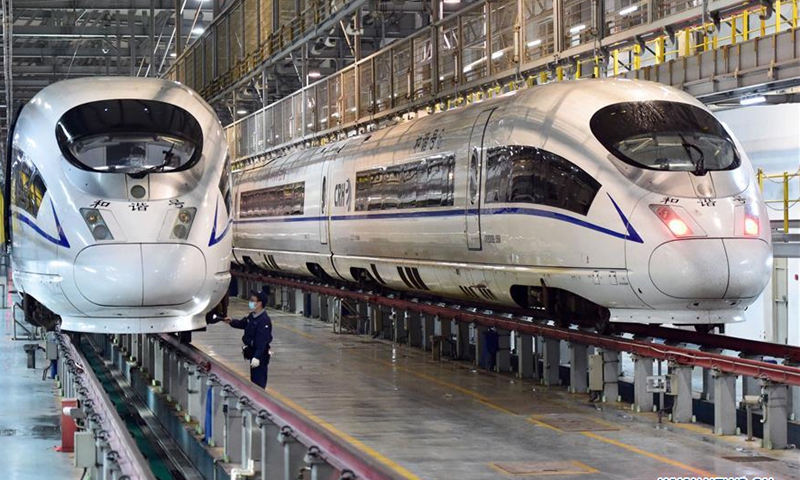 A mechanic works at a train maintenance workshop in Hefei, east China's Anhui Province, Oct. 6, 2020. Railway staff members have stepped up the maintenance of high-speed trains to ensure traffic safety as the National Day and Mid-Autumn Festival holidays are driving up travel demand. (Xinhua/Huang Bohan)

The plan was put forward in a guideline issued jointly by the Ministry of Transport and the Ministry of Science and Technology, in a bid to accelerate the construction of transport systems using scientific and technological innovations.

The guideline will focus on the major tasks that limit China's development in science, technology and transportation, for which it will strengthen the availability of high-quality science and technology, promote innovations in related industries, and enhance the fusion of new technologies with transportation.

Based on the schedule put forward in the guideline, by 2025, basic research in transportation and the applications of that research will be significantly strengthened, breakthroughs will be made in key technologies, the integration of cutting-edge technologies with transport will be accelerated, and a scientific and technological innovation system will be established to buildChina into a country with strong transportation networks.

China will focus on breakthroughs in core components such as power, perception and control in transport vehicles, communication and navigation equipment, as well as emergency rescue equipment.

The country will also try to overcome key technological barriers in some specific industries, including saturation deep diving and airworthiness certification.

A cooperation agreement for the two ministries was signed on July 24, 2020, to strengthen the integration and cooperation of science and transportation, and promote the transformation of transport development from relying on traditional factors to focusing more on innovation, said Cen Yanqing, a deputy director of the Department of Science and Technology under the Ministry of Transport, during a press conference on Monday.

China Aerospace Science and Industry Corp started research into ultra-high-speed trains in August 2017. The company's highest designed speed for these trains is expected to exceed 1,000 kilometers per hour, according to previous media reports.

The world's fastest maglev transportation system with a speed of 600 kilometers per hour, which was self-developed, rolled off the assembly line on July 20 in Qingdao, East China's Shandong Province, another crucial milestone in the country's rapid rise as a global leader in high-speed rail technology and manufacturing.