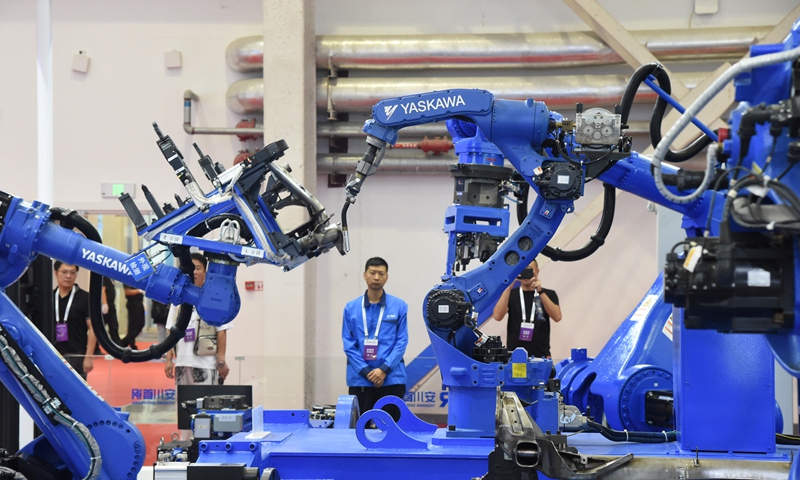 A robotic arm manufacturer in Dongguan, South China's Guangdong Province, displays some products for testing. The factory, like many other Chinese tech companies, is now stepping up efforts to accelerate its self-developed technologies. (File photo: Chen Qingqing/GT)

China will continue to open up and encourage international technology and science cooperation, the Minister of Science and Technology said on Wednesday.

Wang Zhigang, minister of science and technology, noted that although many Chinese companies, mainly high-tech companies and high-tech personnel, are increasingly squeezed out by international community, China will still unswervingly advance international technology cooperation which has been in the forefront of the country's reform and opening up.

The Global Innovation Index released by the World Intellectual Property Organization shows that China's ranking has jumped from 29th in 2015 to 14th in 2020, which echoed the increasing input the country has put into the science and technology field.

During the 13th Five-Year Plan, China's funding for basic science research has nearly doubled, reaching 133.6 billion yuan ($20 billion) in 2019. The research and development expenditure has increased from 1.42 trillion yuan to 2.21 trillion yuan. The technology contract turnover has doubled, exceeding 2.2 trillion yuan in 2019.

In addition to its own technology advancement, Wang noted that China has been taking a leading role in promoting global scientific and technological cooperation and talent exchanges in the past five years.

Under the framework of the Belt and Road Initiative, China has supported a combined total of more than 8,300 young scientists from various countries to work in China, trained 180,000 talents, and established 33 joint laboratories along the Belt and Road countries.

Especially in the face of COVID-19, China is actively advancing international cooperation in the fight against the pandemic with the establishment of a data sharing platform which is open to users in 175 countries and regions, and a close collaboration with international community in the research of vaccines, drugs, and testing methods.

Wang noted that in the future, China is willing to further step up efforts in the opening up of science and technology, work with other countries to address public health challenges such as the COVID-19 pandemic and provide more convenience for overseas talents who come and work in China.