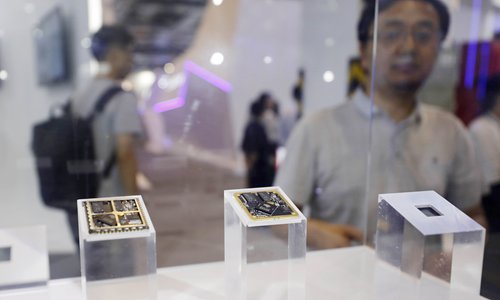 Chinese artificial intelligence (AI) chips sector is experiencing strong growth, with certain competitive edges in 2019 despite a US technology crackdown, though there remains a big gap to fill, company representatives attending the 2019 World Artificial Intelligence Conference (WAIC 2019) in Shanghai said on Friday.

Chinese chip makers from Huawei to Cambricon has been banking on a wave of growth of chips used for AI. Experts attending the WAIC said domestic AI chips have prospered in the past two years.

Ma Haixu, president of Huawei's intelligent computing business unit, said the company has been able to produce all types of chips for the computing system, including Kunpeng, Ascend AI, and network and management chips.

For instance, the Kunpeng 920 processor scores 930 in the SPECint benchmark test - a computer benchmark specification for CPU integer processing power - which is 25 percent higher than the highest performance of all other existing processors.

On August 23, Huawei also released what it claims to be the most powerful AI chip, Ascend 910.

China's AI chip market continued to maintain rapid growth in 2018, with the overall value reaching 8.08 billion yuan ($1.13 billion), up 50.2 percent year-on-year, according to a white paper released by CCID Consulting during the WAIC on Friday. The market will further grow to 30.6 billion yuan in 2021, the industry report showed.

But, according to experts, chips alone may not be enough to improve computing power.

"The three basic elements of AI technology are big data, algorithms and computing power, and we usually refer to the last one as chips, but processors alone are not enough. The architecture behind chips is very crucial, and developers can optimize it," a programmer surnamed Chen told the Global Times during the WAIC.

"I think that's why Huawei is trying to foster an industrial ecosystem. Compared to the US, China still lags behind in the number of professionals."

"We need AI professionals to speak the language chips can understand to make the best use of them," Jin Yaohui, the chief engineer of the Artificial Intelligence Institute at Shanghai Jiao Tong University, told the Global Times on Thursday.

"Huawei didn't talk about competing with some dominant products in the market; instead, it is trying to approach clients by offering them one more choice. I think that's smart."

An employee at Horizon Robotics told the Global Times on Friday that five car manufacturers from home and abroad have ordered Horizon Journey 2 chips.