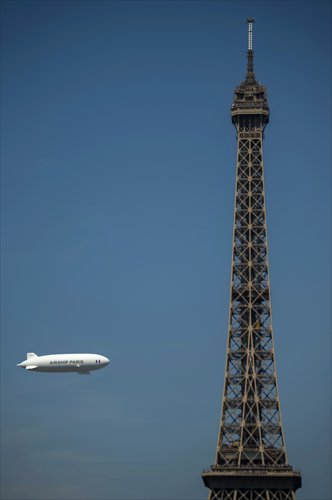 China's floating airship has set a new world record, reaching an altitude of 7,003 meters while making high-altitude scientific observations to facilitate the protection of water sources and geological changes.China's self-developed floating airship Jimu No.1 set the new world record at 6 am on Thursday morning above Lake Namtso, the second largest lake in Southwest China's Tibet Autonomous Region, China Central Television (CCTV) reported. It set the previous record of 6,390 meters in April. The airship will play a significant role in helping maintain and protect water sources in Asia, tracking climate and geological changes, Li Zhaojie, director and research fellow of the Aerospace Information Research Institute of the Chinese Academy of Sciences, told the Global Times on Thursday.Jimu No.1, is a lighter-than-air ship with a volume of 2,300 cubic meters, and is equipped with various instruments that will provide data on atmospheric conditions above an altitude of 7,000 meters, which can provide a new support for research into water, ecology and human activities in the Qinghai-Tibet Plateau, CCTV said. The airship has been breaking records during a monitoring project that is part of China's second Qinghai-Tibet research mission, that is being carried out by more than Chinese 40 researchers and aims to help researchers understand the source of the water supply and water transmission routes on the plateau. In the future, the airship is expected to reach an altitude of 10,000 meters, the Xinhua News Agency reported in January, citing Chinese Academy of Sciences.Compared with observation stations on the ground, floating airships can make stereoscopic observations that provide more accurate data as the airships can directly travel to test areas and are less affected by buildings and local terrain, according to Li.The Qinghai-Tibet Plateau, which is a water source for many big rivers in Asia, makes it an ideal place for carrying out high-altitude water vapor observations and conducting climate and geological researches, said Li. Dubbed the "third pole" and "the water tower of Asia," the plateau provides water to many Asian rivers including the Yangtze, Yellow, Indus and Mekong, according to Xinhua.