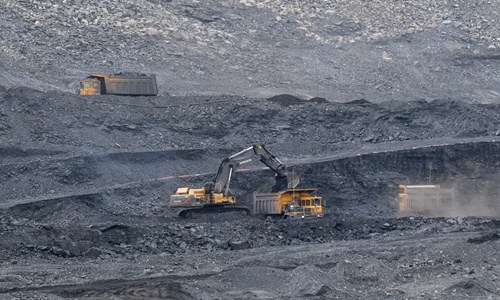 As the central government has required Chinese coal companies to prioritize miners' health and safety in recent years, several coal producers are starting to embrace intelligent technologies as an alternative to traditional mining.

The number of fully mechanized coal mining faces in China has increased from 3 in 2015, to 275 in 2019, and is expected to exceed 550 by the end of this year, according to data from a report by China Coal News.

By using intelligent technologies, the number of miners on the coal face has been significantly reduced. Miners are only required to monitor mining machines on the roadway or at the control center.

By 2022, the number of intelligent mining faces will hit more than 1,000 in China, with output from these intelligent faces growing to between 1 billion and 1.5 billion tons. In addition, a batch of intelligent coal wells will be built, according to a three-year action plan published this year by agencies.

China's domestically-supported 5G special network system was first used at a coal mine in Zoucheng, East China's Shandong Province. The coal mine, operated by Shandong Energy Group, reduced its data transmission time to 20 milliseconds through its use of 5G, achieving real-time manipulation in underground unmanned coal mining.

In total, 21 different types of robots have been put into use by Shendong Coal, such as robotic shearer machines, work face inspection robots, continuous excavation robots and belt conveyor robots.

Although Chinese coal producers have made some strides in achieving intelligent coal mining, it should be noted that 92 percent of coal mines still extract coal using miners. China should further develop core technologies and equipment and train high-end talent in the mining industry, in a bid to achieve comprehensive intelligent coal mining systems, analysts said.