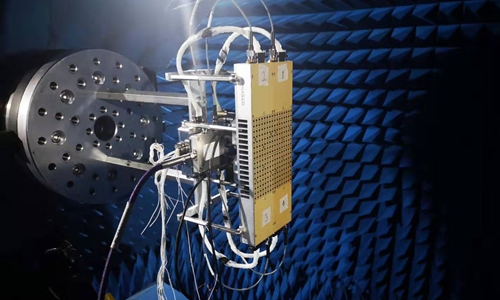 China's self-developed millimeter wave (MMW) phased array chip will be put into mass production in February with low-cost silicon technology, the chip's research team said. An industry expert said that its low cost will greatly boost popularization of 5G in China and beyond.

Industry experts believe that the technology breakthrough that enables mass production of the 5G MMW phased array chip will effectively launch the product into the global market at a reasonable price and with a better performance.

The chip, unveiled to the public on Sunday, was jointly developed by Chengdu Xphased Technology Co (Xphased), Purple Mountain Laboratories, and a research team from Southeast University in Nanjing, East China's Jiangsu Province.

Zhang Chengjun, general manager of Xphased, told the Global Times on Tuesday that the company has significantly reduced its production cost and made commercialization possible, and mass production of the MMW chips is expected to start on February 1.

"In the past, MMW chips in III-V compound semiconductors were priced at several hundred or even thousands of yuan. Given these high prices, it is basically impossible to commercialize chips," Zhang said.

"The new chip has a much lower price compared with the same kind of chips in the global market, but the quality of the new chip is at world-class levels," he said.

The innovation project involving the MMW chip was initiated in March 2016. After some years of research and development, small-scale trial production began last October, and 50,000 chips were made.

Xphased has already received orders from companies worldwide, including some in France, and it is discussing with companies in the US about future deals regarding phased-array chips and antennas, Zhang said.

The launch of the chip is a late-stage advantage for China's 5G development, Zhao Dixian, a professor at Southeast University, told the Global Times.

However, some believed that although it is an important step toward 5G development, challenges remain.

"The mass production of MMW chips is surely an indispensable part of the popularization of 5G in China, but it's not all," Xiang Ligang, a veteran industry analyst told the Global Times on Tuesday.

"To achieve 5G popularization, other elements such as coding, core networks and software management also need to take place," he said, adding that it will still take some time before the popularization of 5G.