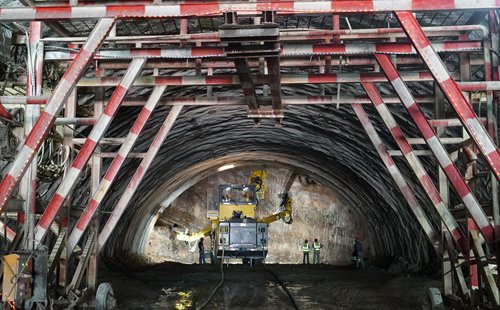 A state-owned company is saving manpower and ensuring construction safety and quality through the use of pioneering technology in the mechanical construction of a tunnel in Southwest China's Guizhou Province.

Longchang Tunnel, part of the Guihuang Expressway in the city of Fuquan, is two kilometers long and passes through a thick layer of limestone and dolomite, which increases the difficulty of construction.

To meet the challenges posed by the complex environment, China Communications Construction Second Highway Engineering Co has pioneered the use of robots and improved safety with the use of a real-time monitoring system and GPS. Virtual reality (VR) technology is also being used to train construction workers, Ma Jianyun, general engineer of the tunnel project, told the Global Times.

The tunnel is scheduled to be completed by the end of 2019, said Fan Wei, director of a department of the company. After construction, the tunnel will play an important role in regional industrialization and urbanization, and will help to lift surrounding towns and counties out of poverty.

Workers have to undergo safety training before joining the construction. The training includes watching animated demonstrations of safety situations based on VR technology and playing assessment games to test their knowledge, the Global Times reporter observed on site.

In the training room, Liu Guiping, the company's safety coordinator, demonstrated how to put out a fire using an extinguisher, along with other VR-simulated situations.

The company is also using nine kinds of robotic machines on the project, each of which has a clear function, such as geological forecasting, tunneling and arched frame installation.

The "robot family," which takes up tasks formerly done by humans, is the main labor force in the construction process, Ma noted.

Workers only need to sit in the air-conditioned cabin of the intelligent three-arm drilling jumbo to press the start button and watch the machine accurately locate and drill holes in the tunnel.

The 17-meter jumbo has telescopic drilling arms and can walk flexibly. The workers have named it "Bumblebee," project manager Chen Jiabao said.

"The traditional manual construction method requires nearly 20 people who have to endure dust, noise and sweat, and take safety risks. The intelligent system now only needs two operators to control the robot, which makes the project faster, more efficient, safer and of higher quality," Ma said.

In addition to the drilling, robots are used in other processes of the tunneling.

"The mechanical construction in the whole process has saved on manpower by 35 percent. The number of people needed for the drilling, arch frame installation and shotcrete processes was reduced from about 40 to 12," Ma said.

The company developed a Project Management System based on big data, GPS and AI technology, which can comprehensively monitor the tunnel, track workers, analyze air quality both inside and outside, and record the construction process.

Every worker has to wear a uniform inserted with a GPS chip before entering the tunnel. Workers can communicate and share moments with each other in the system on their mobile devices. The company can also respond immediately when emergencies occur, ensuring construction safety.

The system also can provide geological forecasts by using geology radar. In emergency situations, workers in the tunnel can call operators outside by using an emergency broadcasting system.

Tunneling incidents result in fatalities every year in China.

According to media reports, three workers died and one was injured in August at the construction site of a tunnel in Zhaoqing, South China's Guangdong Province. Five workers died in May after the collapse of a subway tunnel that was being constructed in Qingdao, East China's Shandong Province.