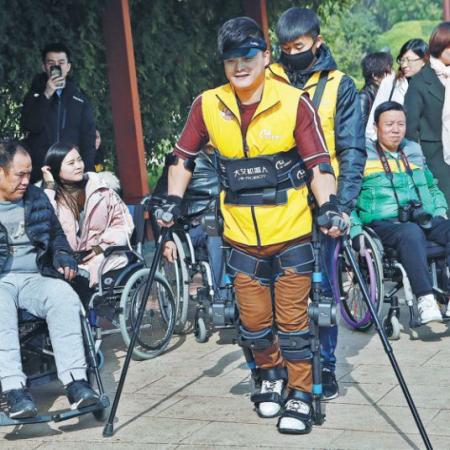 An artificial intelligent hand has been developed by a Beijing-based medical team, which can help disabled people in simple jobs like unbuttoning clothes and lifting a cup.

Unlike traditional artificial limbs, the wearable bionic hand, with signal sensors tracking morphological skin changes, can collect signals of finger movement intention transmitted through muscles. These signals are then sent via skin to the bionic fingers, especially the thumb, to realize the movement intention of the fingers, said Yang Yong, a senior surgeon from Beijing Jishuitan Hospital who is the team leader of this project.

To better control the "fingers," the patient wearing the artificial hand needs to undergo a surgery named the muscle redistribution technique (MRT) to redistribute the key muscles of the remaining part of the patient's disabled arm, said Yang.

The key muscles will be sutured into the skin so that the finger movement signals of the muscles can make morphological skin changes, which are then collected by the sensors on the skin surface. The bionic fingers, combined with the electromyographic signals of the forearm, can then make corresponding movements, Yang added.

According to the hospital, two patients have undergone MRT surgery on the distal forearm level.

Zhou Ping (pseudonym), from Xiongxian County in north China's Hebei Province, lost his right forearm two years ago in an accident. Since receiving the MRT operation and being equipped with a bionic hand two weeks ago, he has begun to feel the changes in his life.

"I now can grab a glass of water, unbutton shirts and pick up small things like marbles using the bionic hand," Zhou said, adding that he puts it on every morning, and takes it off before going to bed.

This is not the first time for Chinese doctors and researchers to develop intelligent bionic hands.

Through the aggregate movements of its 280-plus parts, the artificial hand can make more than 20 gestures, such as grabbing and pinching, and even control chopsticks.

There are 85 million disabled people in China, of which nearly 25 million have disabilities related to limbs, showed data released by the China Disabled Persons' Federation.

Yang believes that with further improvement of the MRT as well as the sensors and smart hand functions based on the feedback of patients, the technology will benefit more people with physical disabilities and improve their quality of life.