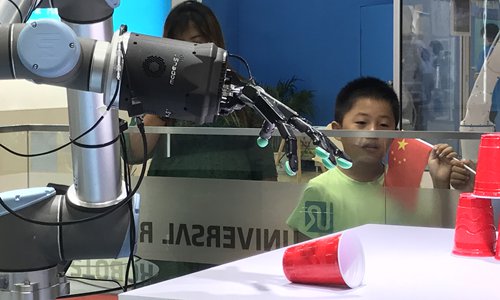 A robotic hand on display at the 2019 World Robot Conference on Wednesday (Photo: Global Times)

China has been catching up in some of the top technologies in robotics in recent years, Toshio Fukuda, the Institute of Electrical and Electronics Engineers president-elect for 2019, told the Global Times on the sidelines of the ongoing 2019 World Robot Conference on Wednesday.

For instance, harmonic gears, which are widely used in aerospace and the robotics sector, could only be produced in Japan 30 years ago. However, in the past five to 10 years ago, these components have also been produced in China.

China's technological progress has been noted in the international market and academia. "The cooperation ties between China and Europe are strong," said Bernd Liepert, president of the European Robotics Association.

"It is very important for the robotics industry as a whole. Many Chinese professors in this field started their research in Europe, and many European companies are also working with Chinese partners on technology and marketing."

European companies are exploring a wide range of cooperation with China, Liepert noted, and this trend means more innovation and business opportunities for both sides.

According to a report released on Tuesday by the Chinese Institute of Electronics, China has become the world's biggest market for the application of industrial robots for seven consecutive years, accounting for one-third of the global market share.

China's development in advanced robotics, especially in industrial robotics used for manufacturing, has been gaining recognition and generating opportunities for other countries.

Harbin Institute of Technology Robot Group showcased 59 robotic products themed "Robotics Biosphere" at the conference, aiming to realize the optimized integration of resources in the robotic sectors and form partnerships with companies around the world.

One of the displayed robots, named the Bee Robot, a domestically developed product equipped with simultaneous localization and mapping technology, was delivered to Japan as the first case of a made-in-China collaborative automated mobile robot to be exported.

Another company, Shenzhen-based Yuejiang Technology Co, specializes in robots for education and industry, especially automation. The company's robots have found a wide range of users, and it has cooperation projects with German car company Volkswagen and Chinese technology giant Alibaba Group, according to the company's website.

The latest products, including a multifunctional desktop robotic arm named Magician, can realize functions such as 3D printing, laser engraving, writing and drawing, Zhang Meng, a regional director of the company, told the Global Times.

Yong Chong Soon, chairman of the Malaysia Artificial Intelligence & Robotic Association, told the Global Times on Wednesday that the association has secured deals with both Yuejiang and Beijing Canbot Technology Co in hopes that the cooperation will stimulate local robotics companies and reduce the need for humans to do repetitive work.

According to Yong, most of the robots that Malaysia gets from China are industrial robots including robotic arms for factories, such as those made by Yuejiang, which are expected to improve industrial efficiency.

"In Malaysia the overall population is around 30 million, and 10 percent of that is foreigners," Yong said, "Of which many come to Malaysia as workers."

"These are very hardworking people, but they are trapped putting in long days in repetitive factory jobs. We hope that by bringing in advanced industrial robots, those people can be released from the factory floor, and the efficiency of Malaysia's economy will also be improved."

The research center, which Canbot is cooperating in Malaysia with a local company, has drawn $100 million of investment and support from the Malaysian government. The center is expected to be a regional hub for the Association of Southeast Asian Nations that provides opportunities for technological innovation and inspiration from China.

Yong hoped that the cooperation with Chinese companies will bring more skills to local staff and more opportunities for innovation.

According to Yong, there are many robotics companies in Malaysia, but many remain primitive technologically. "We hope that bringing research and design centers of Chinese companies to Malaysia will offer the local companies more access to technology and staff training."