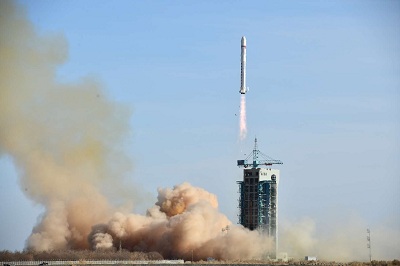 BEIJING, Jan. 17 (Xinhua) -- The data of China's first seismo-electromagnetic satellite have been included in a new global geomagnetic reference model, which could facilitate high-precision navigation and basic geoscience research.

The 13th generation International Geomagnetic Reference Field (IGRF13), recently released by the International Association of Geomagnetism and Aeronomy, was based on data from 12 countries including the United States, Britain, France, Denmark, Russia and China.

The international geomagnetic reference field is used to describe the earth's main magnetic field and its changes. The model has been updated every five years since 1900. This is the first time that data from China were included in the model.

China's first seismo-electromagnetic satellite, also known as Zhangheng 1, was sent into space on Feb. 2, 2018, to study the global electromagnetic phenomena and seismic precursors, which might help establish a ground-space electromagnetic information and earthquake monitoring network in the future.

Shen Xuhui, the satellite's chief scientist who is also chief engineer with the Institute of Crustal Stress under China Earthquake Administration, said the satellite has been working stably in orbit and has obtained global geomagnetic observation data.