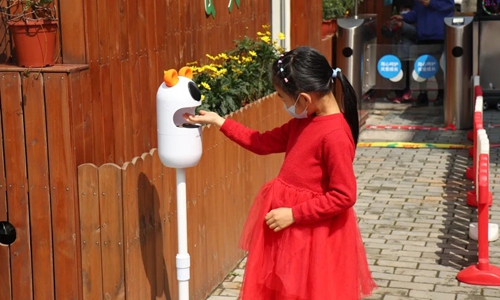 A student uses a rinse free hand wash robot in the shape of a cartoon penguin in Changhe Kindergarten in Hangzhou of East China's Zhejiang Province. (Photo: Global Times)

As schools in China begin to resume classes, many are using high-tech devices to measure temperatures and monitor epidemic control work.

Changhe Kindergarten in Hangzhou of East China's Zhejiang Province introduced a rinse free hand wash robot in the shape of a cartoon penguin to make children love washing their hands.

"After children place their hands under the mouth of the penguin-shaped robot, it spits out foam," a teacher of the kindergarten surnamed Yu told the Global Times.

"Additionally, a robot called Xiaonuo also works to share students' information to their parents," she said.

Another Hangzhou elementary school held a special commencement ceremony on April 26. Students were required to wear a special "one-meter cap" made from a regular cap by students and their parents, but with one-meter-wings added from recyclable materials, according to the school's official WeChat account.

The move aims to make students remember the length of one meter so that they can keep social distancing with other students, said Hong Feng, a deputy principal of the elementary school, local media reported.

"It tests body temperatures of three to four students at the same time, and students within normal body temperature range can pass," Peng Juan, an official of the school told the Global Times.

"The system can test body temperatures of more than 3,000 students in the school within 30 minutes," said Peng.

"Vocal alarm sounding 'abnormal body temperature' will be issued from the system if sensed fevered students, and the student will be sent to hospital after the second test conducted by doctors on standby showing the same result, "said Peng.

Students in Baimahu Campus of Hangzhou No.2 High School are able to pass a facial recognition system in front of their school gate without pulling down their face masks, which avoids congestion.

With nine grade levels, the school introduced four temperature measuring systems and set up different channels for students of different grades, which allows a student to enter the campus within two seconds.

A system is set in front of the school gate for graduating class students and teachers, which integrates identity verification, code scanning, temperature measuring, and facial recognition in face masks.

With fast temperatures measuring speed, the Xiaonuo robot system was introduced for students in first and second grade. Thermal imaging systems were also erected in dormitories. The local government also set up a system to transmit students' temperature to the government.

With more than 4,800 students, No.1 Middle School of Wenshan in Wenshan Zhuang and Miao Autonomous Prefecture of Southwest China's Yunnan Province set four channels with thermal imaging temperature measurement devices in front of the school gate.

"It only takes 10 minutes for all the non-resident students to pass, and resident students are required to measure temperature twice a day in the dormitory and classroom building respectively," Linhui, a teacher of the school, told the Global Times.

Zeng Yunyu, a deputy manager of the Wenshan branch of China Mobile, said "When a group of people pass the channel, cameras can sense the temperature higher than 37.3, issue alarms and capture their faces," local media reported.

Zeng said that the body temperature information collected from schools will be synchronized to the platform of the city's education authorities as a way to supervise epidemic control in schools.

The Wenshan branch of China Mobile has been designated by local education authorities to provide devices and technical support to city's schools. The thermal imaging temperature measurement device used in the No.1 Middle School of Wenshan will be used in more than 70 schools in the city.