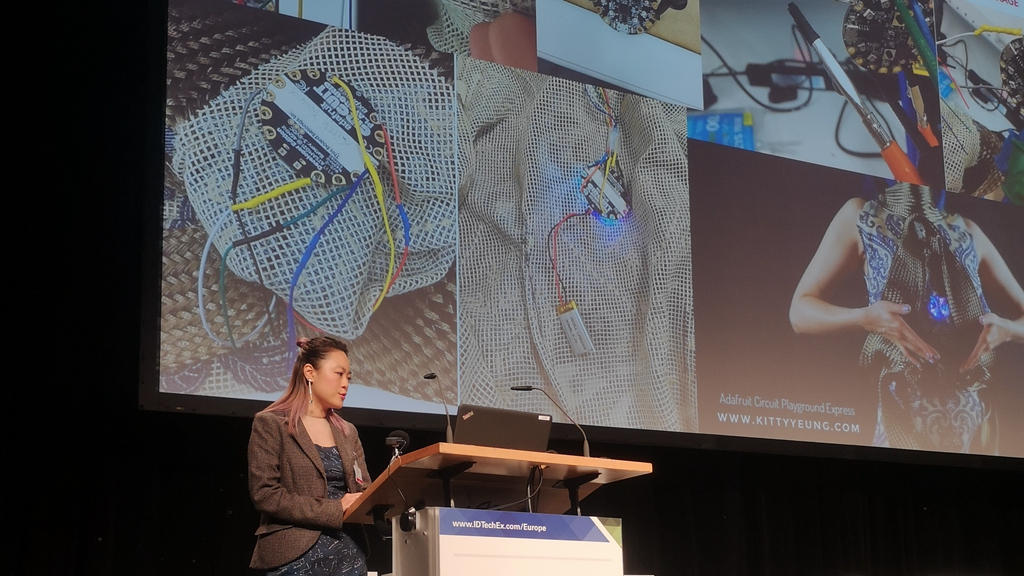 Kitty Yeung calls herself a "creative technologist," a term coined by a community of like-minded individuals that combine technology with creativity.

Yeung has been gaining notoriety for her "wearable technology" designs that incorporate electronics into fashion, maximizing the functionality of the clothing we wear.

She creatively blends electronics with fashion, inventing wearable technology that allows us to charge our phones, track our health or the weather through our clothing.

Her ideas are unique, innovative and revolutionary.

As a child growing up in China, Yeung always loved art and physics.

"At the very beginning, it was very traditional."

She used to design clothing for the characters of stories she would write. Then she became more interested in physics and began playing with robotics.

"I thought why don't I combine the two. So I started putting electronic controllers into clothes. This makes fashion and clothing more interesting if we can make them functional and useful."

This experimental phase would define her future.

After she finished high school in China, she moved to England and studied physics at Cambridge University. She then went on to Harvard Unversity in the US where she received a PhD in applied physics.

She worked at Intel for a while and is now the manager of Microsoft's garage, a platform for amateur designers to realize their unique concepts.

In one of her designs, Yeung has embedded a heart monitor into a beautifully designed evening gown.

"It has three electrodes that you can attach to your body. When the heart rate monitor detects your heart rate, you can actually see your EKG and you can map that to the LED and make it blink according to your heart rate. I put it behind the flowers so it looked a little like fireflies."

This data can then be recorded for analysis by a health care professional.

Another one of Yeung's dresses uses material found on Mars.

"This is a piece that uses volcanic basalts. It's a type of rock that you can find in locations like Hawaii or Iceland near the volcanos. But they also can be found on Mars."

Her thought process for this piece had her thinking about life on the red planet.

"This is the optical dust sensor. It has several sensors including temperature monitor on it so you can program it to detect optical dust, so air quality."

This sleeveless, low backed dress will also send out a high-frequency pitch in response to concerning air quality.

"It would be useful if everyone had something like this on their clothes because then we could crowdsource data and then we can do an analysis of the city's air quality."

Yeung hopes technology like this can help environmentalists and scientists fight global warming.

"A lot of creative designers, they try to put technology into clothing, but they don't have the support from manufacturing yet. And manufacturers wouldn't want to change the way they manufacture things until they see the people showing the demand," said Yeung.

"But people wouldn't even know what they want until they see existing products in the market, so this is a negative cycle that has been going on," she said. "A 'negative cycle' we need to break."

Yeung added that by getting engineers and creative designers to work more in parallel, they could create ideas that can not only advance the fashion industry, bus also humanity.

"It's incredible. It's the 21st century, we are building smart cities we are making autonomous cars, electric cars, but then clothing, this thing everyone needs every day, is left behind."

While Yeung honed her unique craft in the West, China is where her inspiring ideas began so she would like to see a more supportive atmosphere for creative scientists in her homeland.

"I think in general there just needs to be ways to encourage young women to choose science. I noticed that usually I am called a scientist or maker or engineer in the West, but I am called a female scientist, engineer or maker in China. So there's probably still some stereotypes against women being scientists so I think at a very early stage we should encourage them."

And who knows, maybe they too will be behind the next revolutionary wearable fashion.