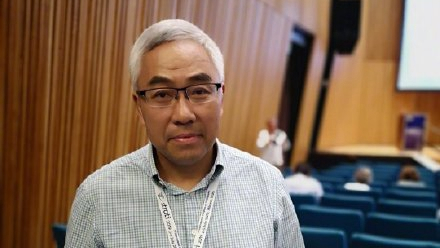 The ICS Award, established in 2004 and awarded to only one person every four years, is to honor high-quality research in stratigraphy by recognizing a single major achievement in advancing stratigraphical knowledge.

Stratigraphy is a branch of geology concerned with the relationships in time and space of rocks and the varied processes that have formed and affected them.

The 58-year-old academician is the fifth recipient of the medal. He has made important contributions to the establishment of global chronological stratigraphic boundaries, the ICS said.

"It's an honor, but more of an encouragement," the Chinese geologist said, adding that it shows acknowledgement of his research work, especially that the accolade is awarded by the highest level of international academic organization in the field.

At the awarding ceremony, David Harper, chairman of the ICS, said Shen is a world-renowned stratigrapher, paleontologist, and an expert on brachiopod fossils.

For nearly eight years as chairman of the Permian Branch of the ICS, Shen has made outstanding contributions to the development of the Permian biostratigraphy, the establishment of stratigraphic sequences, and the study of the Permian extinction (the event that almost ended life on Earth 252 million years ago), he added.

Shen, together with other researchers, has demonstrated the simultaneity and instantaneity of the Permian extinction, thus concluded that the main reason of the mass extinction was dramatic changes of the ground surface environment caused by large-scale magmatic activities.

The findings were published in top academic journals, including Science and were compiled into textbooks at universities and colleges at home and abroad.

Nanjing University said that the award is not only a commendation for Shen's achievements but also recognition of China's overall research level in the field.