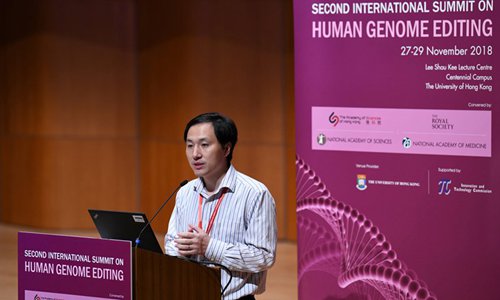 Chinese scientists recently designed a remote-controlled gene-editing platform by using light, which can precisely target and kill cancer cells and offer revolutionary treatment for diseases including cancer, diabetes and Parkinson's disease. A team led by Song Yujun, a professor at the College of Engineering and Applied Sciences at Nanjing University, designed the near-infrared (NIR) light-responsive nanocarrier for gene-editing tool CRISPR-Cas9 for cancer therapeutics, and the team published their findings in the journal Science Advances on Wednesday. "Using infrared light, the new technique can precisely alter or cut the designated spot in the genome, greatly improving the target effect of gene-editing tool," Song told the Global Times on Monday. The strong penetration ability of infrared light provides possibilities for scientists to precisely control the gene editing tool, CRISPR-Cas9, in deep tissue. The CRISPR-Cas9 technique allows genetic materials to be added, removed or altered at particular locations in the genome. But CRISPR-Cas9 is still a challenge to precision medicine worldwide due to its off-target effect and in some cases it may cause cancer in cells, Song said. Off-target editing could result in serious consequences in cancer treatment, as it may cut or alter the wrong spot in the genome, thus killing healthy cells instead of cancerous ones. In a notorious experiment that helped create the world's first gene-edited babies last year, He Jiankui, the scientist who conducted the experiment, used CRISPR-Cas9 to alter the CCR5 gene in twin baby girls. He was widely criticized as the technique cannot guarantee accurate excision of the gene.The new technique developed by Song's team has been tested on mice with tumors, and the result found that the progression of tumors was gradually delayed on the mice that received the new technique for 20 days. "However, it's still far from human clinical trials due to concerns that include the toxic effect of the nano materials as well as needing an ethics review," Song said. It was relatively easy to conduct the experiment on mice due to their small size, but the amount of light needed for humans is still uncertain, Song said.China has tightened management on new biomedical technology after He's case, and a regulation on biomedical technology released in February states that high-risk clinical research projects including gene-editing technology must be approved by the health department of the State Council, and will have to pass both academic and ethics reviews.