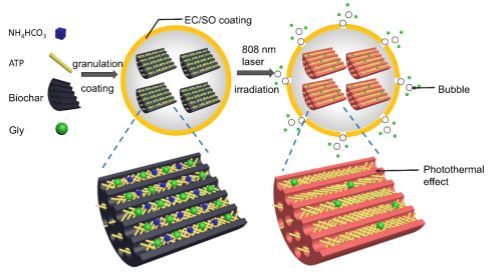 It is difficult for traditional pesticides to achieve on-demand dosing, and the utilization rate is only about 20 to 30 percent, which not only raises the cost but also causes serious environmental pollution.

The development of new pesticide formulations that increase utilization efficiency has become a focus of agricultural and environmental research, according to scientists from the Hefei Institute of Physical Science under the Chinese Academy of Sciences.

They fabricated controlled-release pesticide particles by combining materials including biochar and attapulgite. The particles can control the release of pesticides by the near infrared light and the thermal effect generated.

The technology can be cost-effective and has broad application prospects.

The research was published online in ACS Sustainable Chemistry & Engineering.