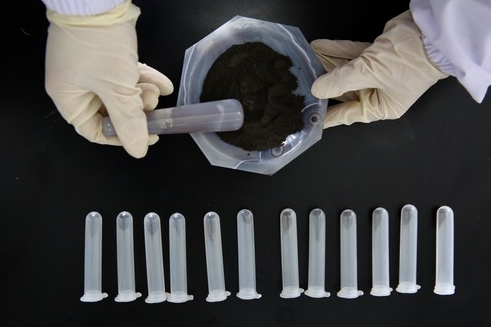 Chinese scientists have found a material that can hide a hot object from heat-sensing infrared cameras, according to Suzhou Institute of Nano-tech and Nano-bionics (SINANO).

Hiding an object from thermal cameras could be useful for military and technology applications as well as for research. The team led by Zhang Xuetong in SINANO with Chinese Academy of Sciences found a flexible, foldable and robust film that can achieve infrared stealth.

The researchers fabricated an aerogel film with good thermal insulation performance and enhanced it by coating its fibers with polyethylene glycol (PEG) and a protective waterproof layer.

PEG stores heat when it melts and releases heat when it solidifies. In simulated sunlight, the composite film covering an object soaked up heat from the sun while only slowly increasing in temperature, just like the surroundings, making the object invisible to a thermal camera.

When the light was turned off to simulate night, the coating gradually surrendered its stored heat energy to match the surroundings.

"The new material has a wide range of applications. It can not only be used for infrared stealth but also as a heat insulator for electronic components and battery separators," Zhang said.

The findings have been published on the recent issue of the academic journal American Chemical Society.