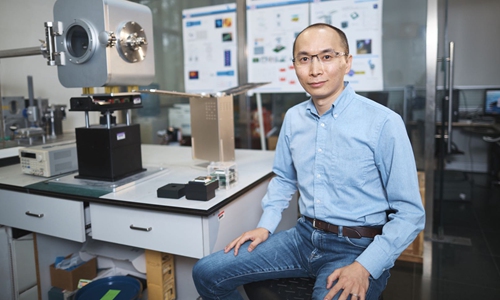 A Chinese research team led by Tsinghua University professor Feng Hua announced the team’s successful re-detection of soft X-ray polarization from the Crab nebula with their space program PolarLight, marking the reopening of a long-awaited window in astronomy that had been shut for more than four decades.

The research was published in the Nature Astronomy.

Feng told the Global Times on Monday afternoon during a press conference that the team had also “accidentally” discovered a time variation of polarization that coincides in time with a glitch of the Crab pulsar. And according to Feng, The variation is associated with pulsar emission but not nebular emission, suggesting that the pulsar magnetosphere may have been altered after the glitch.

PolarLight is a dedicated project with a soft X-ray polarimeter onboard a CubeSat manufactured by Spacet, a micro/nano satellite manufacturer in Changsha, capital of Central China’s Hunan Province.

The CubeSat was launched into space in 2018 from the Jiuquan Satellite Launch Center in Northwest China’s Gansu Province.

It was built on the basis of a high-sensitivity technique initially developed by Italian scientists, who are also collaborators to the PolarLight project.

Unlike imaging, timing, and spectroscopy, polarimetry in the standard band of X-ray astronomy is a least explored window, with the previous experiment occurring in the 1970s, mainly due to the lack of high-sensitivity techniques.

However, X-ray is considered as one of the best techniques for studies on celestial bodies such as black holes and neutron stars.

The PolarLight detector has a small surface area, similar to the size of a coin. In an attempt to demonstrate the new technique in space, the detector surprisingly discovered interesting phenomena associated with the Crab pulsar instead, implying that X-ray polarimetry is indeed a powerful probe, Feng told the Global Times.

Feng’s team also successfully extended the durability of the detector from what was 30 minutes by Italian scientists four decades ago to five to 10 years now, which enables research teams to conduct long term astronomical observations.

Pulsars are the most accurate clocks in the universe. However, their rotational frequency may undergo a sudden change followed by a gradual recovery. This is called a pulsar glitch. The mechanism is still unknown, and may be related to the interior structure of the neutron star. PolarLight detected a time variation of the X-ray polarization right after a glitch of the Crab pulsar on July 23, 2019.

Astronomy is a field of science driven by observations. New observational techniques, also called new windows, are of essential importance. This is the reason why astronomers all over the world are working hard to develop advanced techniques to enable X-ray polarimetry in future astronomy, read a statement the Tsinghua University research team sent to the Global Times.

The technique that is used in PolarLight will be utilized on a joint Chinese-European mission concept enhancing X-ray Timing and Polarimetry (eXTP) planned for 2027.