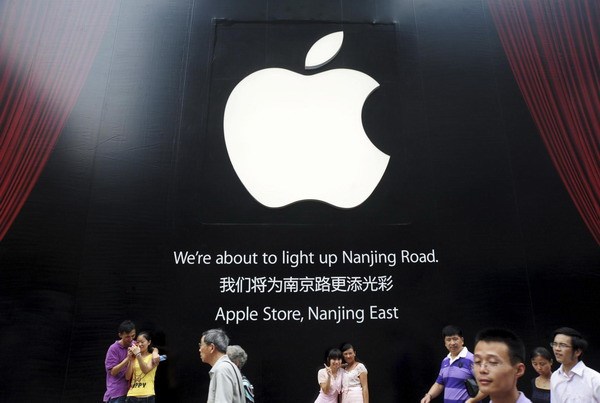 Visitors pose for photo in front of a soon-to-be-opened Apple store in Shanghai. (Photo: Xinhua)

A Chinese technology company on Monday decided to proceed with its lawsuit against Apple, accusing the latter's Siri application of infringing on the patent of its voice recognition software.

Shanghai Zhizhen Network Technology Co, developer of voice recognition technology Xiao-i Robot, of which a patent was applied for in 2004 and granted after five years, filed a lawsuit to the Shanghai High People's Court against Apple Inc, requesting the latter to terminate patent infringement and to stop manufacturing, usage, offers to sell, sales and imports of products with Siri that violate its patent.

It is also seeking 10 billion yuan ($1.43 billion) in compensation.

Xiao-i Robot started in 2003 as a chat tool for MSN, Yahoo Messenger and other similar networks. It has also expanded to Android and Apple's iOS, where it bears a striking similarity to Siri.

The patent regarding the chat tool mainly comprises two functions: Users can have a conversation with the robot in a way that is similar to talking with a human. They can also ask the robot to find information and play a game.

After technical comparison and analysis, Shanghai Zhizhen believed that Siri's technical program falls into the range of protection that it holds with the invention patent.

The company said that the patent is one of its core competences and key intellectual property in the field of human-computer interaction and artificial intelligence in the country.

"As a practitioner in the science and technology industry, I sincerely respected Apple Inc for their products and services that have brought values and experiences to the world," said Yuan Hui, founder, board chairman and CEO of Xiao-i Robot.

"But Apple needs to show due respect for innovation. Since it resorted to our patent, it ought to pay a reasonable price to us," he said.

Trials between the two companies date back to 2012, when Zhizhen first accused Apple of IPR infringement on its voice recognition patent. Trials at a Shanghai court first opened in 2013. But the case has been pending due to another lawsuit launched by Apple in Beijing regarding the validity of Xiao-i Robot's patent. The lawsuit made its way to the Supreme People's Court with its verdict announced on June 28.

Shanghai Zhizhen said on July 2 it received the supreme court's verdict that its patent regarding voice recognition was protected by law.