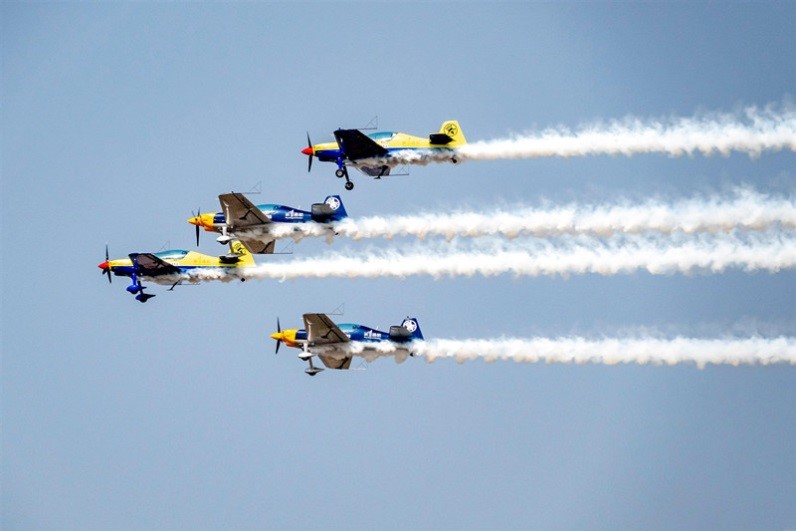 On June 3, 2019, Anyang, Henan Province, at the opening ceremony of the 11th Anyang Aviation Sports Culture and Tourism Festival, the aircraft competed with the automobile and motorcycle racing. (Photo: People's Daily Online)

An increasing number of Chinese aviation companies are attending the air show held in Pairs, displaying cutting-edge aerospace technology at the event and in a bid to establish strategic cooperation with global partners.

China Aerospace Science and Technology Corporation (CASC), one of the Fortune Global 500 firms, showcased its launch vehicles and satellites such as the LM-7, together with the LM-8 and the LM-11 at the event.

As the leading force in China’s space industry, CASC said it also introduced China’s BeiDou Navigation System, the three-step plan of its manned spaceflight and the lunar exploration project at the show, according to the official website of CASC.

The fifth-generation FC-31 multi-role stealth fighter could also be spotted at the stand, together with the JF-17 multi-role fighter, jointly developed by China and Pakistan, Wing Loong’s MALE UAV System, the L15 advanced trainer with attack and air combat capability, the brand-new medium attack helicopter Z-10ME, the 4-ton attack helicopter Z-19E, and the Y-9E, a new generation multi-role transport aircraft, according to a note sent to the Global Times on Tuesday, June 18.

The double-seat JF-17 and the AC312E helicopter made their international air show debut.

AVIC also displayed a portfolio of civil products including the MA700 passenger aircraft, the AC312E helicopter, and the Y-12E/F commuter aircraft.

The MA700 has currently received 285 orders from 11 customers. The middle fuselage and nose structure have been delivered for the first MA700 static stress test, which is expected to roll out this year.

AVIC advocates for mutually beneficial cooperation as reflected in its specialized ability at this year's air show and it pays considerable attention to showing its capacity and tap into the market with all its partners, the company said in a note sent to the Global Times on Tuesday, June 18.

The Commercial Aircraft Corp of China, the producer of the locally-made C919, not only brought the ARJ, the C919 and the CR929 models, but also showed a CBJ business jet model, displaying that the company is diversifying its product portfolio.

“The number of attendees was more than that at past events, not only were there state-owned enterprises, but also more private companies as far as I could see,” Richard Wang, a sales director of Beijing China Promotion Ltd told the Global Times on June 18.

He has attended six Paris air shows since 2007.

It is necessary to see state-owned enterprises join the event, because they are representing the level of the Chinese aerospace industry, which is an important part of China’s global aviation industry, and private companies are also an important aspect of the industry, he added.

The Paris Air Show is one of the largest international aerospace exhibitions in the world. The show has attracted more than 2,400 companies and organizations from about 50 countries and regions.