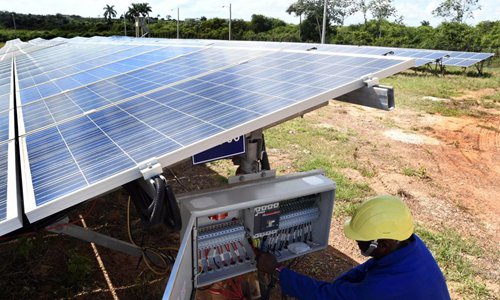 A worker is reviewing the operation of the solar panels of the Pinar 220 A2 photovoltaic solar park, on the outskirts of the city of Pinar del Rio, Cuba, October 15, 2019. (Photo: Xinhua)

The sun shines on a gigantic sheet made of solar panels located in the outskirts of the Cuban city of Pinar del Rio, some 150 km west from Havana.

Cuban and Chinese flags were fluttering above the Pinar 220 A2 photovoltaic plant, which operates on raw materials and technology donated by China.

The solar park, which came into operation in February 2018, covers about 5.8 hectares with over 15,500 panels manufactured by the Chinese solar energy company Yingli, in the northern province of Hebei.

"Electricity generation begins automatically at 08:00 (1200 GMT) and is disconnected, also automatically, at 19:00 (2300 GMT), when the sun starts to go down," Rosa Maria Molina, director of the solar plant, told Xinhua.

Molina used to be a math teacher, but changed her profession after "falling in love" with the new Chinese technology.

The electricity generated by the solar park is injected into the national power grid, she said.

For Cuba, a country that relies heavily on oil to generate electricity, renewable energy sources are crucial, particularly solar energy, as the Caribbean nation has abundant sunshine most of the year.

According to Cuban experts, the island has the potential to generate 5.0 kilowatt-hours per day per square meter.

"Since we started operating until now, the solar plant has generated about 10,800 megawatt-hours (MWh), which represents a saving of 2,800 tons of fuel," Molina said.

Apart from the fuel saving, she said, what is more relevant about their work is that they have "prevented 9.75 tons of carbon dioxide from being emitted into the atmosphere."

The facility has a life span of 25 years. It employs 18 people, all university graduates or mid-level technicians who are responsible for operating, maintaining and guarding the solar park.

It is one of eight solar parks in the province that can generate 18.5 MWh in total, meeting 14 percent of the electricity demand in the country.

Pinar del Rio has identified 28 areas for construction of photovoltaic parks, which are expected to generate 109 MWh altogether.

As part of the ongoing process of economic reforms, the Cuban government expects to generate 24 percent of the electricity from renewable resources by 2024.