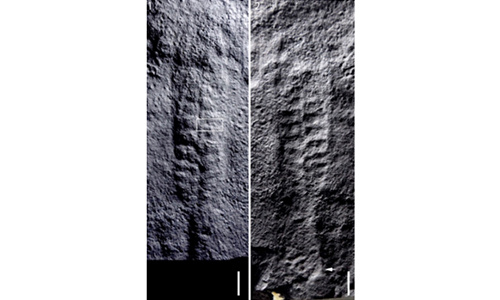 Arborea deticulata n. sp. from the Shibantan biota (Photo: Courtesy of the Nanjing Institute of Geology and Palaeontology, Chinese Academy of Sciences)

Leaf-like ancient creatures that lived at the bottom of an ancient sea about 550 million years ago, have been discovered in the Shibantan biota in the Three Gorges region of Central China’s Hubei Province, by the early life research team of the Nanjing Institute of Geology and Palaeontology, Chinese Academy of Sciences (NIGPAS), in collaboration with American scholars, the Xinhua News Agency reported on Tuesday.

Unlike the leaves that grow on branches, these “leaves” are actually curiously shaped early animals that lived at the bottom of the ancient ocean.

The four ancient creatures are extinct. They look roughly similar, with a body length of about 10 centimeters and a leaf-like appearance, Pang Ke, associate professor of NIGPAS told Xinhua.

The frondose fossils have rounded suckers at the bottom. They stick to the bottom of the sea with suction cups, while the stem and leaf parts stand upright in the water. They normally sway with the water under the sea. The researchers speculate that they feed by absorbing small particles of organic matter from seawater as they swayed.

According to NIGPAS, the Ediacara-type organisms are macroscopic, soft-bodied eukaryotes that prospered in the late Ediacaran. They constitute the unique macroscopic fossil biota on the eve of the Cambrian Explosion, which was a landmark in the evolution of early macroscopic organisms.

A typical frondose fossil consists of an upright leaf-like body (petalodium), a connecting stem and a basal attachment disc. Frondose fossils are widespread and occur in great numbers. However, due to their simple external morphology and preserved without internal anatomical information, we know nearly nothing about their phylogenetic affinities, NIGPAS told the Global Times.

Early workers interpreted them to be early sea pens, but ontogenetic and phylogenetic evidence has rejected this hypothesis. Recent studies suggested these frondose fossils might represent crown- or total-groups of metazoa.

Some 550 million years ago, these undersea “leaves” were a particularly large and widespread group of creatures. But to this day, little is known about their biological properties. They predate what is known as the Cambrian Explosion. Unraveling the mystery of these ancient undersea “leaves” may provide important clues to the evolution of early life, Pang told Xinhua.