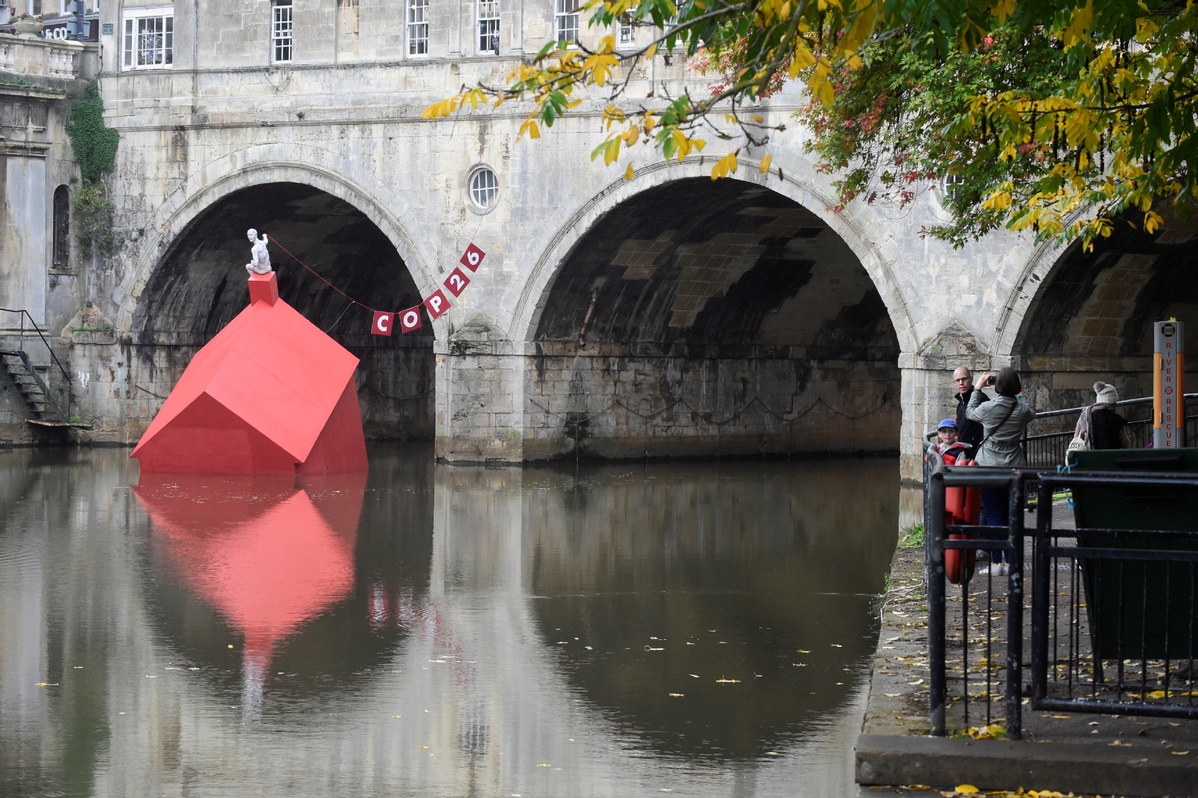 An installation of a 'Sinking House' is partly submerged to highlight climate change ahead of COP26, in Bath, Britain, Oct26, 2021. [Photo/Agencies]

Economists have failed to properly add up the astronomical cost of failing to tackle the climate crisis, an expert has said ahead of the COP26 summit.

Nicholas Stern, a professor of economics and government at the London School of Economics, told The Guardian newspaper too little value has been attached to the lives of young people and the future, and too much weight put upon the perceived cost of taking action.

Stern told the paper the cost of doing something about the climate crisis is not as high as some have claimed, because new technologies have brought fixes within reach. He also said the cost of clean-energy, including from wind and solar power, has tumbled.

Stern, who heads the Grantham Research Institute on Climate Change and the Environment, told The Guardian economists have incorrectly applied "discounting "principles, through which they measure the value of future assets against an investment.

"It means economists have grossly undervalued the lives of young people and future generations, who are most at threat from the devastating impacts of climate change," he said. "Discounting has been applied in such a way that it is effectively discrimination by date of birth."

Stern told the paper the transition to net-zero emissions actually presents an opportunity, because it will "be the great driver of a new form of growth: the growth story of the 21st century".

"This growth will be more resource-efficient, more productive, and healthier ... and will offer greater protection to our biodiversity," he told the paper.

Stern was speaking to mark the 15th anniversary of the Stern Review, which looked at the economics of the climate crisis and concluded that the cost of inaction was greater than the costs of action.

Since 2006, when the review was concluded, the world's carbon emissions have risen by 20 percent.

"The economic question now is: how do we manage the radical transformation we have to make in the world economy in the next 20 or 30 years?" he said. "How do we promote the 2 percent or 3 percent extra investment we'll need?"

The veteran filmmaker David Attenborough, who has been the voice and face of many BBC wildlife documentaries over the years, also made an impassioned plea for governments to grab the opportunity presented by the COP26 summit.

He also said the world's richest nations have a "moral responsibility" to help the poorest navigate the climate crisis.

"Every day that goes by in which we don't do something about it is a day wasted," he told added.

The Independent newspaper, meanwhile, noted that climate activist Greta Thunberg is set to join a protest on Nov 5, during which workers demanding climate action will withdraw their labor.

Thunberg wrote on Twitter: "We invite everyone… to join us."