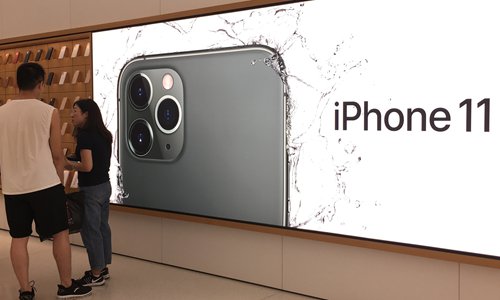 Chinese consumers have been storming US tech firm Apple Inc's retail stores since the arrival of its flagship iPhone 11 last week, along with the first wave of comments pinpointing the gadget's weakness in overheating and weak signals, media reports and customer reviews at e-commerce site showed.

Since the arrival of iPhone 11, Apple's latest model which reportedly offers better cost performance, many Chinese customers have splashed money to grab the latest offerings by what is believed to be one of the world's top tech company.

However, the ownership that lasted for just about a week has been enough to generate some negative user feedbacks at one China's e-commerce site, the Global Times found.

At jd.com's online marketplace, there are about 300 negative comments on iPhone 11 in just over a week since preordering began, and these comments mainly focused on the overheating and signal weakness.

"The gadget becomes quite hot just after a few minutes of usage, I was afraid of explosion," an internet user said.

"Overheating is truly a problem, and I was thinking of returning it during the first few days of usage," a Beijing-based resident surnamed Liu who has purchased a new iPhone 11 told the Global Times on Monday.

The problem has not influenced Canalys' forecast on iPhone 11's performance in China, but if the situation gets worse, Apple needs to give relevant solutions to roll out more risks, Jia said.

However, positive comments are still predominant with over 11,000 positive ratings on jd.com.

Chinese tech bloggers also noted the two shortcomings of iPhone 11, and they also found that the phone is more shock resistant than its predecessors, according to media reports.

Analysts said the concerns may signal the sales binge of iPhone 11 to be short-lived.

It's hard for iPhone 11 to repeat the US brand strong performance in China market despite price concession, Zhang Yi, CEO of Shenzhen-based iiMedia Research, told the Global Times on Monday, citing survey of his institution.

The absence of 5G technology in its new products in the next half of 2019, the first year of 5G, is hard to win the favor of consumers, Zhang said.

A wave of pro-Huawei sentiment among China's high-end consumers who can have certain modeling effects on the whole market, is getting stronger amid US' crackdown on the Chinese tech giant, Zhang added.