China has been moving steadily toward its goal of fulfilling the country's first Mars mission in the coming two years, with Chinese scientists looking to send its astronauts to the red planet. 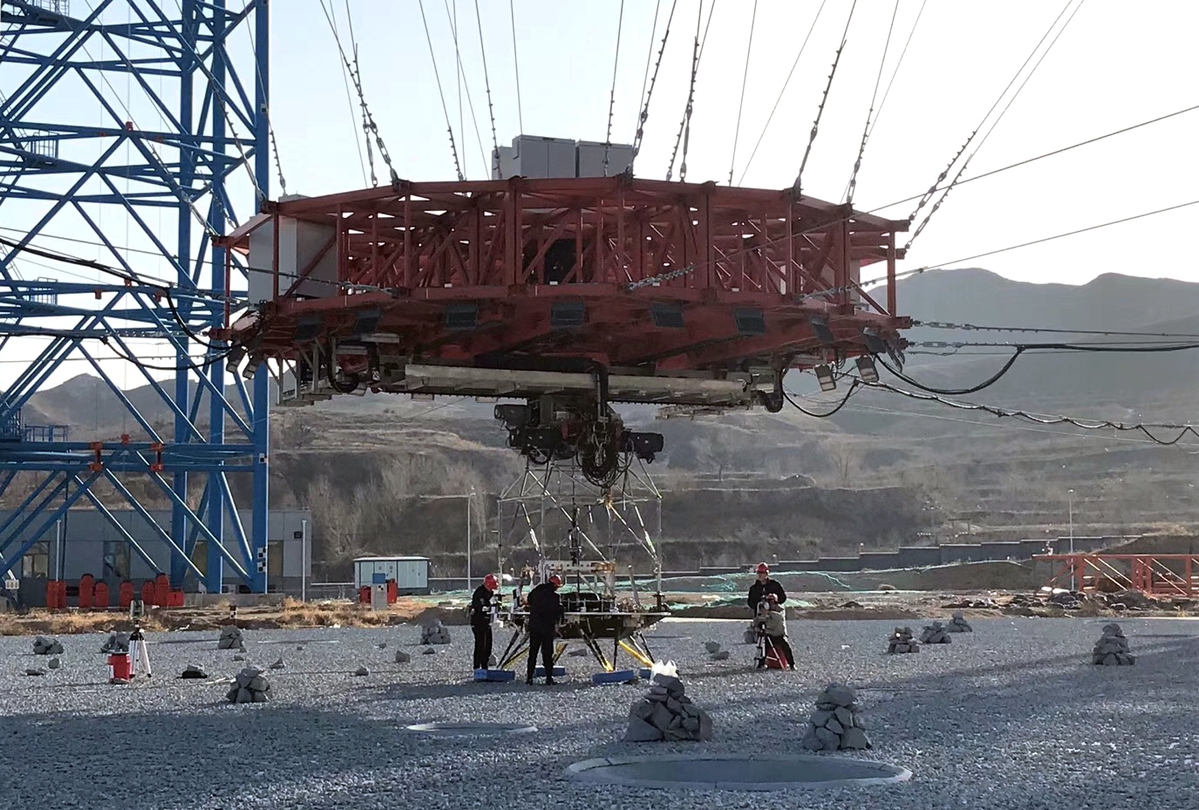 Last week, the nation's space authority carried out a key experiment for the coming Mars mission in Hebei province's Huailai area, in front of dozens of foreign diplomats and journalists.

The experiment, which aimed at verifying the design and capability of the lander of China's robotic Mars probe, was the first of its kind in the country, according to Zhang Kejian, the director of the China National Space Administration. Zhang oversaw the test.

The move also marks the first time that China opened its Mars mission to foreign visitors, Zhang said, adding that it was a practical step in the nation's exchange and cooperation with the international space community.

During the experiment, a test version of China's Mars probe lander, which was tied to a 140-meter metal tower, conducted hovering, descent and obstacle-evading operations in a simulated Martian gravitational environment at Asia's largest testing site for landing on extraterrestrial bodies. The site is run by the Beijing Institute of Space Mechanics and Electricity.

Present during the experiment were ambassadors and other diplomats from 19 nations including France, Italy and Brazil; representatives from the delegations to China of the European Union and African Union, as well as the Asia-Pacific Space Cooperation Organization; and a number of domestic and foreign reporters.

"Through this event, you will be able to better understand our Mars mission and other deep-space exploration programs and we can discuss the feasibility of further cooperation," Zhang said before the experiment. "We welcome space authorities, research organizations and enthusiasts from around the world wishing to take part in our space endeavors."

Zhang Rongqiao, chief designer of China's first Mars mission, said at the test site that the seven-minute landing process will be one of the most difficult and challenging parts in the nation's Mars mission. Therefore, engineers built the facility to simulate the red planet's gravitational condition and the Martian surface.

Ye Peijian, a leading scientist in deep-space exploration at the China Academy of Space Technology, said last month that China's Mars exploration program is proceeding well and will be the country's first planetary expedition.

He said the mission will be launched next year and will land an unmanned probe on the Martian surface before July 2021.

The farthest distance between the Earth and Mars is about 400 million kilometers, so a probe will travel about seven months before reaching the Martian atmosphere.

Compared with its foreign predecessors, the Chinese mission is expected to clock better performance in terms of technological levels and engineering capabilities, and it will fulfill three scientific objectives: orbiting the red planet for comprehensive observation, landing on Martian soil, and sending a rover to roam the landing site, according to Ye.

"If we succeed, this will become the world's first Mars expedition accomplishing all three goals with one probe," the scientist said.

Sun Zezhou, the spacecraft's chief designer at the China Academy of Space Technology, said the robotic probe will consist of three parts - the orbiter, lander and rover.

The rover will have six wheels and four solar panels and will carry 13 scientific instruments. It will weigh more than 200 kilograms and operate about three months on the planet, he said.

In the second step in China's Mars exploration program, a larger probe will set off for Mars around 2030 to take samples before returning to Earth, according to space officials.

Pang Zhihao, a space technology researcher in Beijing, said it is very meaningful for mankind to reach Mars, noting that some Chinese scientists have proposed carrying out a manned Mars mission before 2050.

"Sending astronauts there will give man better opportunities to look for traces of life on Mars. This is important because in our solar system, Mars resembles Earth the most, so research of the possibility of the existence of life on it will enable us to better understand the origin and evolution of life on our mother planet.

"Also, there are theories that Mars was very similar to Earth in terms of environment billions of years ago, so manned missions will allow extended, specific surveys that will help to forecast how the Earth will likely grow," the researcher said.

But scientists and engineers must still overcome a great deal of difficulties to realize manned journeys to Mars, he said.

"First of all, Mars is very far from Earth - the closest distance is 55 million kilometers, which means that a round trip will take more than 500 days," the researcher said. "Second, having a man-carrying rocket enter into the Earth-Mars transfer trajectory will require it to be able to fly at 'escape velocity', or 11.2 km per second."

Other factors that Pang said should be taken into consideration include disturbances in communication between a Mars-bound spacecraft and Earth, energy sources to sustain operations on Martian soil, and astronauts' health risks caused by lengthy stays on the red planet.

"Decreases in bone mineral density, space radiation and mental health will pose threats to astronauts and their missions. Scientists will need to develop a reliable bioregenerative life-support system," Pang said. "Of course, if they can develop some sort of game-changing propulsion system like a nuclear-powered rocket, then the time needed in a Mars journey will be tremendously shortened and the complexity of such a mission will be hugely reduced."

In April, a Mars simulation base in the barren, windswept hills in the northwestern province of Gansu, sponsored by China's space authorities and the local government, opened its doors to members of the public, especially youngsters, to help them experience what it would probably be like to live on the red planet.