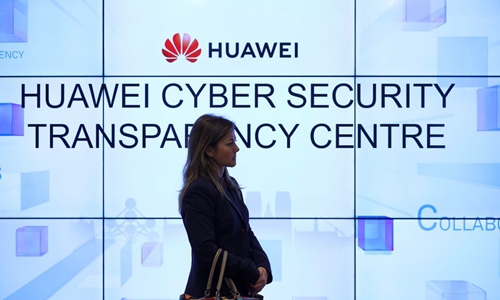 A woman listens to a debate at Huawei Cyber Security Transparency Center in Brussels, Belgium, on January 30, 2020. (Photo: Xinhua)

Xiao Xinguang, a member of the national committee of the CPPCC and also the chief software architect of leading anti-virus company Antiy Labs, told the Global Times on Sunday that policies like the Measures are widely used in many countries, and the US implements the world's most strict and complete censorship system. It is a brazen case of double standards that the US and other Western countries are conducting censorship while criticizing China's cybersecurity measures.

On April 27, the Cyberspace Administration of China (CAC) and 11 other authorities jointly released the final version of the Measures. Some Western media reports said that the Chinese government will censor and control the internet in all aspects and restrict market access for foreign products and services in order to achieve a security monopoly.

A spokesperson of the CAC said during a press briefing in early May that the Measures are aimed at ensuring the security of China's critical information infrastructure and supply chains, as well as detecting and avoiding risks in purchasing products and services.

According to Xiao, the US took the lead in developing a mature national security review system in the 1980s, after enacting The Exon-Florio Amendment in 1988. The system was enhanced in 2000 with the addition of cyberspace censorship, which is worth learning from.

However, the US wields its cybersecurity censorship system as a "big stick" to service its hegemony and unilateralism, said Xiao.

"Through the non-transparency of censorship standards and  procedures, as well as the rejection of appeals, the US system becomes a huge deterrent," according to Xiao.

Xiao believes that it is necessary to establish China's own Measures as there are many gaps to be mended in terms of cybersecurity. "The Measures will ensure supply-chain security and also provide countermeasures when Chinese enterprises face unfair cybersecurity censorship in other countries."

On May 15, the US Department of Commerce announced an upgrade of the sanctions policy against Huawei, restricting Huawei's ability to use US technology and software in its design work.

Xiao believes that in order to achieve its goal of political and economic repression, the US is undermining the stability of global supply chains and seriously damaging fair competition in the context of globalization, as well as the sovereignty, security and development interests of other countries. It is even forcing some US companies to make tough choices.

"It is hard for the Chinese government and people to accept enterprises that participate in the construction of China's key information systems and infrastructure while cooperating with the US government's sanctions when facing pressure."

Therefore, the Chinese government has both the right and the responsibility to ensure that China's industrial development is based on a secure, open and transparent global supply-chain system, so that the Chinese market will become a stage of fair competition between domestic and international manufacturers, he said.

According to Xiao, Antiy Labs has detected multiple high-risk attacks against China from abroad. The company also exposed US hackers' invasion of SWIFT, the largest interbank messaging system, in the Middle East.

"US cyberintelligence activities have gone far beyond their security needs…  However, it is the US and other Western countries that frequently blame China for hacking," said Xiao, noting the US has the tradition of letting intelligence agencies intervening business activities.

Some US media reported in mid-May that China-related hackers tried to steal COVID-19 vaccine information from US research institutes. Xiao said that those reports showed "the illusion of vaccine monopoly profits" held by some US politicians.

"China is now in the pole position of coronavirus vaccine research and development after conducting phase two clinical trials… Chinese institutes should beef up cybersecurity and guard against invasion, theft of research achievements and damaging the research progress," Xiao said.