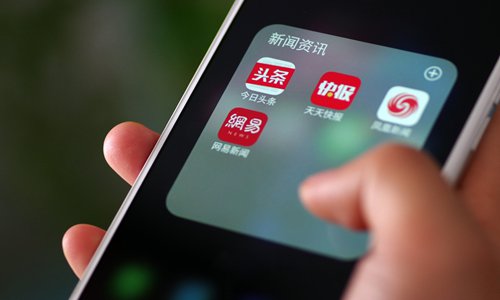 Four news apps including Jinri Toutiao (top left) have been suspended for a few days to three weeks from downloading on Apple's App Store. (Photo: VCG)

The Ministry of Public Security has requested some 100 companies to remove apps from app stores for illegal collection of private data, China's cybersecurity authority announced in a statement on Wednesday. It is part of regulator's broad efforts started since November to crack down on crimes related to private information violation.

The public crackdown mainly focused on apps that violate users' privacy - for example by not providing a privacy agreement, or providing a vague description of the usage of private information or collecting unnecessary information.

China boasts the largest online population in the world. With rapid internet development, Chinese authorities have regularly publicized their ongoing efforts to protect people's privacy at the legislative and law enforcement level.

But criticisms have never been absent. Citing a study by pro-consumer technology website Comparitech about biometric data use in the world, the South China Morning Post reported Thursday that China ranked the "world's worst" for invasive use of biometric data without proper data protection.

Zhu Wei, a communications researcher at the China University of Political Science and Law in Beijing who specializes in cyberspace security, said China had in fact introduced adequate laws to ensure people's privacy back in 2012.

"China's legislation on protecting private data, especially biological information, are the strictest in the world, and the judicial interpretation by the Supreme People's Court has included biometric data protection," Zhu said.

"In addition to the relevant legislation, there are also some regulations on cybersecurity issued by the Cyberspace Administration of China at all levels, which have more protection for privacy," Zhu said.

Xin Haiguang, a senior IT commentator, said that users' private information, including location and age, was a component of big data and could be used to analyze preferences and needs, information that is very valuable for companies.

"When these companies get your information, they know what you like and what you have been searching for online," Xin said. "Then they can customize advertisements for you, which can boost customer experience."