Debris very unlikely to cause damage as rocket returns to Earth 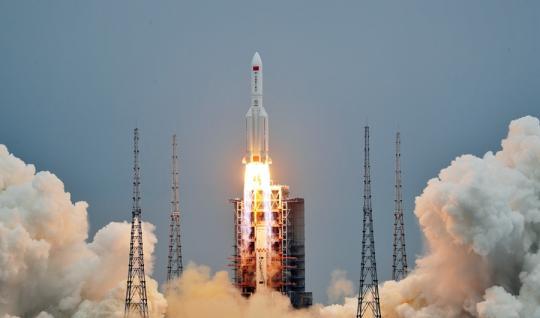 China launches the core capsule of its space station at the Wenchang Space Launch Center in Hainan province on Thursday morning, April 29, 2021. (Photo by Guo Wenbin / Provided to chinadaily.com.cn)

Debris from a Chinese carrier rocket in the coming days is very unlikely to cause damage, said a Foreign Ministry spokesman.

Wang Wenbin said at a news briefing on Friday afternoon that the country is paying close attention to the atmospheric reentry of the core stage of its Long March 5B heavy-lift rocket.

"As far as I know, this type of rocket has unique designs (to make sure) that most of its parts will be burnt up during the reentry process," he said, adding that it is highly unlikely that the debris will cause any harm to aircraft activity or ground-based assets and personnel.

Wang explained that it is international practice to leave core stages of rockets to burn up when reentering the atmosphere.

He also said that Chinese space authorities will make any information available in due course.

Wang made the remarks in response to a question about potential risks of damage on Earth from the rocket's debris.

Many foreign media published reports about what they called "an uncontrolled reentry" of the Long March 5B that lifted the core module of China's space station on April 29, sparking concerns over the possibility of debris crashing in unpredictable areas.

A Long March 5B is 53.7 meters long, with a core-stage diameter of 5 meters. The rocket is propelled by liquid oxygen, liquid hydrogen and kerosene and has a liftoff weight of about 849 tons.

It conducted its maiden flight in May 2020 from the Wenchang Space Launch Center in Hainan province. The launch on April 29 at the same facility was its second mission.