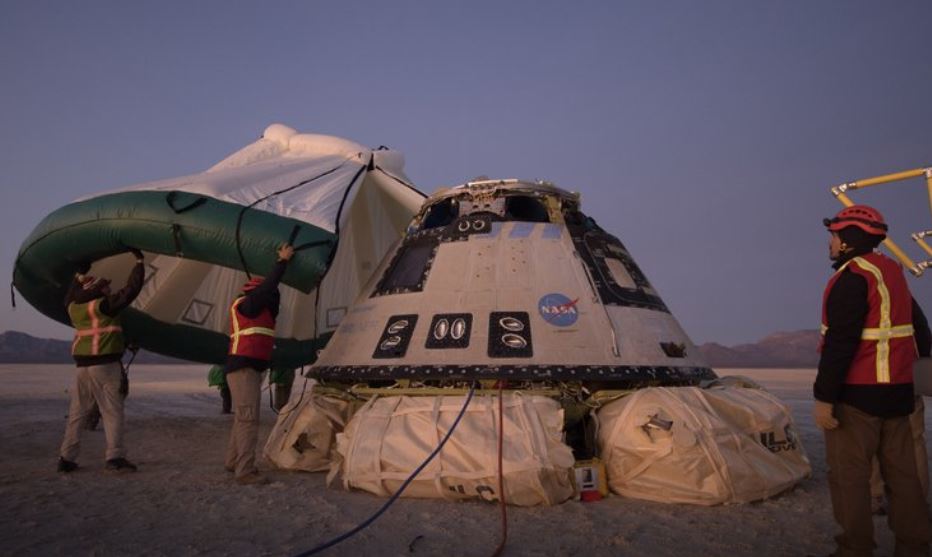 Boeing, NASA, and US Army personnel work around the Boeing Starliner spacecraft shortly after it landed in White Sands, NM, on Dec. 22, 2019. (Photo: AP)

The Starliner capsule launched without astronauts in December, but its automatic timer was off by 11 hours, preventing the capsule from flying to the International Space Station as planned.

In addition, a software problem with the Starliner’s service module was not detected until the flight was underway, according to NASA. That would have interfered with the separation of the service module before touchdown.

If ground controllers had not intervened to fix the problems, NASA said the Starliner could have been destroyed.

These latest findings stem from a joint investigation team formed by NASA and Boeing in the wake of the aborted test flight. The capsule ended up in the wrong orbit and returned to Earth two days later, parachuting down to a landing in New Mexico.

NASA has yet to decide whether Boeing must conduct another test flight without a crew, before putting astronauts on board. Just in case, Boeing reported last week that it took a $410 million charge in its fourth-quarter earnings, to cover a possible mission repeat.

“It remains too soon to speculate about next flight dates,” Boeing said in a statement.

The investigation team found that “critical software defects” weren’t detected before the flight “despite multiple safeguards,” NASA said in a statement. The breakdowns in designing, coding and testing the software will require “systemic corrective actions.”

The team also looked into a third problem, an intermittent space-to-ground communication problem that hampered controllers’ ability to command and manage the capsule.

Additional testing is underway to determine how and why all these breakdowns occurred. NASA said the review should be completed by the end of February.

Boeing said it already is working on many of the fixes. The December mission was supposed to be the company’s last major hurdle before launching the first Starliner crew.

A second private company is on track to launch astronauts for NASA as early as this spring. SpaceX successfully completed a launch abort test last month at Cape Canaveral.

NASA astronauts have not launched from home soil since the space shuttle program ended in 2011, instead riding Russian rockets to get to the space station. The Soyuz seats go for tens of millions of dollars apiece.

NASA has been paying billions of dollars to Boeing and SpaceX to develop capsules capable of transporting astronauts to and from the space station. That effort is years behind schedule.