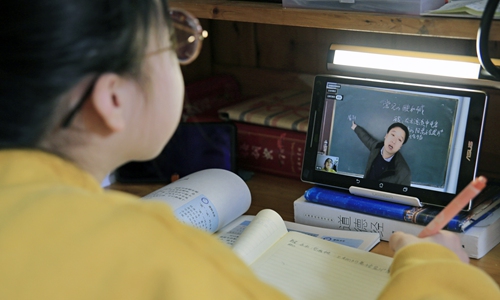 A student takes an online course at home in Yuncheng, North China’s Shanxi Province during the coronavirus outbreak. (Photo: IC)

DingTalk, Alibaba's workplace communications software, received mixed reviews from Chinese teachers and students who use it for online classes during the fight against the novel coronavirus.

The software, originally designed for companies, has become increasingly popular with students taking online classes at home after the Ministry of Education delayed the start of the spring semester to reduce the risk of viral infection and transmission.

Over 12 million students in more than 20 provinces have been involved in DingTalk's online classroom project, which provides free services for over 20,000 primary and secondary schools nationwide, said a DingTalk press release.

Along with unprecedented popularity DingTalk received numerous praise and blame, making it one of the most controversial softwares.

Tao Zi (pseudonym), a 20-something primary school music teacher in Central China's Henan Province, said DingTalk is convenient for her to teach her students online.

"It is easy to use and has many nice functions," Tao told the Global Times Wednesday, saying that on DingTalk she can directly send the parents of her students messages, which will be marked as 'read' after they have read them.

The software is less user-friendly to older teachers, especially those in rural areas who are not very familiar with modern technologies.

"My teachers don't use DingTalk well," said student Chen Xinyu in the village of Zigong, Southwest China's Sichuan Province. "When they explain a question on the book, they usually forget to point their mobile phone camera at the book to show us the question."

When the teacher asks a student to answer his or her question, DingTalk will show the face of the student on the screen, she explained. "I hate that."

Ge has a younger sister who is also taking online classes at home. "We have to sit far from each other to avoid disturbing each other," she told the Global Times Wednesday.

DingTalk has been flooded with negative comments on various app stores within a couple of days. Its overall rating on Huawei's app store has plummeted to 1.6 out of 5 by Wednesday afternoon.

A lot of users graded it 1 out of 5. Among the graders the overwhelming majority were students who complained that DingTalk "ruined" their winter vacation.

"I guess most of them were just kidding," Chen said, adding that she doesn't think the rating reflects the true quality and performance of the software. "It is not good enough, but we have no choice."

This 12th grader said she supports having online classes at home during the epidemic, which can keep her on schedule to prepare for the national college entrance exam gaokao this summer instead of staying at home with nothing to do.

"Nonetheless, I hope the epidemic ends soon and we can go back to school in the near future," Chen added. "To me, having classes via DingTalk is only 60 percent as effective as sitting in the classroom."