TECH Discovery suggests 40 pct of wild deer in US have had coronavirus: report

Discovery suggests 40 pct of wild deer in US have had coronavirus: report

In the northeast corner of the United States, a recent study found neutralizing antibodies for SARS-CoV-2 (responsible for COVID-19) in 40 percent of all white-tailed deer that were sampled, Australian scientific news website ScienceAlert reported on Wednesday. 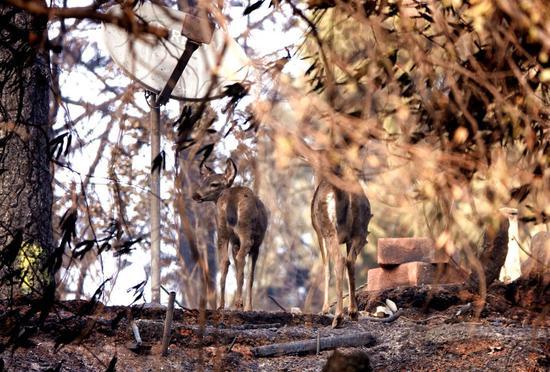 Two deers were seen in the woods where the wildfire engulfed in Paradise of Butte County, California, the United States, Nov. 20, 2018. (Photo: Xinhua)

According to the preprint study published on bioRxiv, by silently harboring and spreading this pathogen, scientists worry deer populations are allowing SARS-CoV-2 to adapt and evolve into new strains -- ones that could possibly re-infect humans years down the road with even greater transmissibility and severity than before.

White-tailed deer in the United States cross paths with humans a lot, whether through fieldwork, conservation work, feeding, hunting, or human wastewater, providing a perfect pathway for a virus to spread back and forth, the article quoted the study as saying.

"The geographic distribution of this species encompasses most of North America and these animals are particularly abundant near urban population centers located in the eastern United States," the authors said.