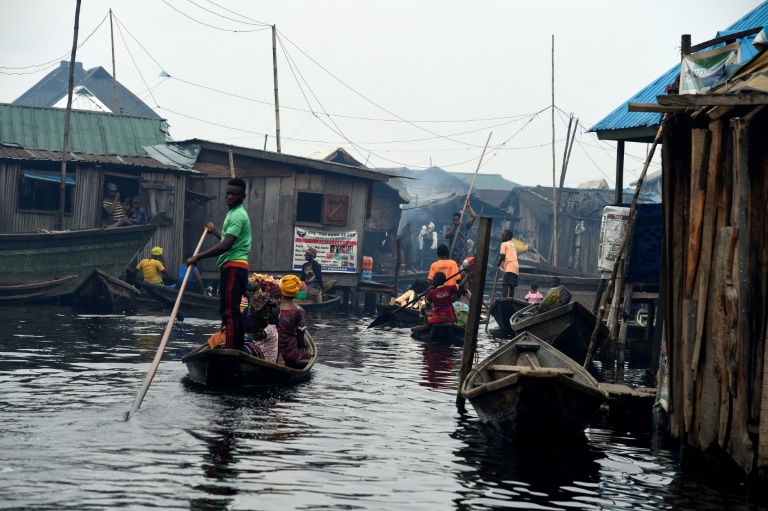 John Eromosele records the coordinates of a bustling canal on his smartphone from aboard a dug-out canoe navigating the floating slum of Makoko in Nigerian megacity Lagos.

The waterway is "like a boulevard, there's always traffic here," the computer coding specialist laughed as other boats jostled for space between rows of wooden houses on stilts.

Officially Makoko does not exist.

Its estimated 300,000 inhabitants -- no one knows for sure how many -- and their ramshackle homes do not appear on any city development plans or maps.

A South Africa-based NGO, Code for Africa, wants to change that.

It wants to help bring badly needed services to Makoko by literally putting the slum on the map.

"Most of the streets here don't have names, and our houses don't have numbers. Sometimes, you can find up to 50 people using the same number," said Chief Albert Jeje, one of Makoko's five traditional rulers.

"Who cares about poor people like us? ... Government officials never come to visit us."

Makoko is dubbed "the Venice of Africa" by some, but its similarity with the romantic Italian city is minimal.

Waste floats on the surface of Makoko's black waters, and visitors choke on the fumes of diesel-fuelled generators and wood-smoked fish.

With no administration, the huge labyrinth of waterways has no mains electricity or piped drinking water, no public schools, no hospital, no police station.

The mapping project was launched in September with funding from the US-based Pulitzer Center and a non-profit organisation called Humanitarian OpenStreetMap, which uses free, open-source software.

The scheme enlists young slum-dwellers to pilot drones and then use the information they collect to map what is a black hole at the heart of Nigeria's economic hub.

"This is a new tool that can allow international organisations or local authorities to intervene to improve access to basic services -- health and water, for example," said Jacopo Ottaviani, one of the project leaders.

Like Lagos, with its 20 million inhabitants, the fishing village that sprang up on the site at the end of the 19th century has relentlessly grown, edging into the sea.

In the first stage of the project, drones will take some 1,000 aerial images of the area, to be stitched together by coding specialists like Eromosele to form one larger picture.

Code for Africa selected six young women from the slum to fly the drones and index the data to make an initial version of the map. Other community members will also be able to add content over time.

Clutching her smartphone, one of the volunteers noted the location of a cassava-processing plant on stilts using Code for Africa's specially developed mapping app.

A little farther on, Abigail, 24, marked down a butcher specialising in dog meat, and just beyond that a traditional medicine clinic and pawnbroker.

"We have fun doing it, and we learn a lot of things," she told AFP.

Code for Africa, which advocates for open use of technology and data journalism, purposely selected women for the project to offer them a CV-boosting experience.

Not all of Makoko's inhabitants seem comfortable with the project.

"People are sometimes suspicious. They wonder if what we are doing is not going to turn against them," Abigail said. "So we try to reassure them."

The concerns are understandable.

In 2012 the Lagos state authorities sent in police to evict people on the grounds that Makoko was an environmental hazard.

"People woke up one morning with posters ordering them to leave," Chief Jeje said.

At least one person was killed as local residents resisted the operation, during which homes were levelled. Eventually the violence forced the authorities to back down.

But Makoko still lives in fear: in recent years, other Lagos slums have been razed and replaced by housing projects.

With the city's population booming, every square metre (yard) is fiercely disputed as developers vie for space.

More often than not it is the poorest who find themselves squeezed out, pushed to the outskirts of the sprawling metropolis.

Chief Jeje hopes that the map of Makoko will help its inhabitants to claim their rights over their homes.

"We are fishermen," he said.