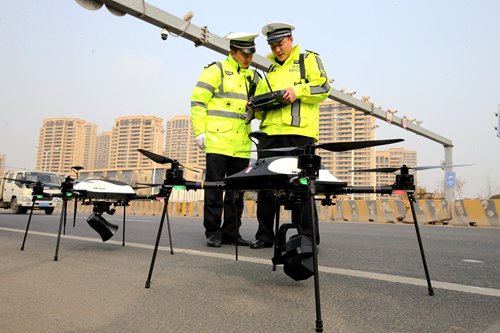 Several Chinese cities used drones to monitor traffic, which they believe could improve law enforcement. However, the practice has also raised privacy and safety concerns. Traffic police in many Chinese cities, including Jinan in East China's Shandong Province and Baoji in Northwest China's Shaanxi Province, have started to use drones to inspect road conditions, detecting traffic violations and accident site investigations.Traffic police in Nanning, capital of South China's Guangxi Zhuang Autonomous Region recently formed a team of drone detection to record the illegal behavior of drivers, such as illegal parking, making a phone call while driving, not wearing a seat belt, or running a red light. The police used the drones to investigate and deal with 438 traffic violations in Nanning in February, Nanning TV station reported Thursday.The drones' use improved law enforcement, said Wu Qiang, deputy chief engineer of the Development Research Center of Aviation Industry Corporation of China, told the Global Times on Sunday."Through high-tech means, insufficient police enforcement has been solved to some degree," a traffic police surnamed Li was quoted by The Beijing News as saying. He added that they are still looking into other uses for the drone. "We are planning to apply the drone to assist police at accident scenes and for future remote monitoring."However, some people online asked if using drones could cover the entire traffic area, how to safeguard the privacy of residents and how to ensure the safety of the drone."Under such a monitor, I feel I'm exposed to the public," a netizen said. "Is the tech mature enough? What if the drone falls and hits someone?" another netizen said.Li said only after they check the video taken by drones and take screenshots would they use the pictures as evidence, noting that the evidence chain is complete and has not received any complaints from drivers, The Beijing News reported.