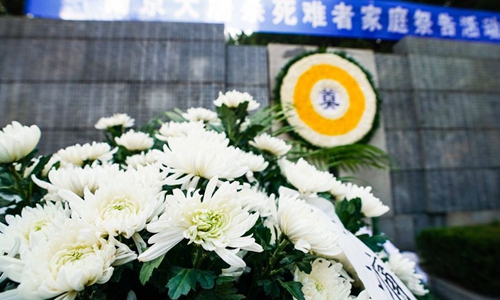 Photo taken on Dec. 3, 2019 shows flowers laid before the memorial hall wall where the victims' names are engraved during a commemoration activity in Nanjing, capital of east China's Jiangsu Province. (Photo: Xinhua)

The Standing Committee of the Nanjing People's Congress announced at a press conference on Wednesday that it is the first time that the sites have been noted in an e-map with small red icons.

The sites were not previously marked on map apps, making it difficult for people to mourn and reflect on history, reported Xinhua Daily newspaper of East China's Jiangsu Province.

Some of the sites mark former mass graves in which the bodies of massacre victims were dumped by Japanese troops.

On Wednesday, a gathering in Tokyo featured descendants of witnesses to the massacre who shared stories of their family members with Japanese people and scholars.

Passing on the memories of those who were tortured and tormented by horrific acts of brutality, isn't aimed at spreading hatred, but to reflect on history and cherish peace, the Xinhua News Agency noted in an article that quoted a speaker as saying. "We should be wary of Japanese historical revisionism and militarism."

Japanese troops occupied Nanjing, then China's capital, on December 13, 1937 and embarked on more than 40 days of slaughter. About 300,000 civilians and unarmed Chinese soldiers were killed during a murderous rampage and more than 20,000 women were raped.

In 2014, China designated December 13 as the "National Memorial Day for Nanjing Massacre Victims." In 2017, the 80th anniversary of the mass killing, a large-scale commemoration was held in the city with Chinese national leaders in attendance.

A Beijing-based commentator who requested anonymity told the Global Times that collective commemorations and the curating of a collection of historic records will deepen Chinese people's understanding of the country's suffering during that period and motivate the public to build a united and strong China.