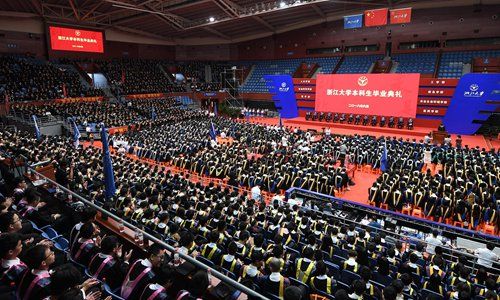 The move marks the official inclusion of AI into undergraduate education at domestic universities, the report said.

A total of 35 universities were among the first Chinese educational institutions approved by the Ministry of Education at the end of March to set up an AI major.

The move came as an AI talent war is heating up globally. Both the Chinese government and private companies are trying their best to build a talent pool as China aims to achieve global power in AI by 2025.

According to a report by job recruitment agency Hays, the talent shortage in the AI field alone will reach 5 million in the near future.

Between 2013 and March 2018, investment in AI in China accounted for 60 percent of the world's total, according to a report from Tsinghua University in July 2018.

Students will commence their study in September and their class will be named after Alan Turing, the pioneer in computer science and AI who cracked the Enigma code used by Nazi Germany.

Zhejiang University is a current leader in AI science with an AI research institute established as early as 1981. It has led domestic development in AI theory, computer graphics, multimedia, and data mining, thepaper.cn report said.

Some netizens have suggested that Ke Jie, the Chinese Go grandmaster who competed against Google's Go program AlphaGo in 2017, should apply to study the major. Ke, a native of Zhejiang, was just recruited by Tsinghua University in March.