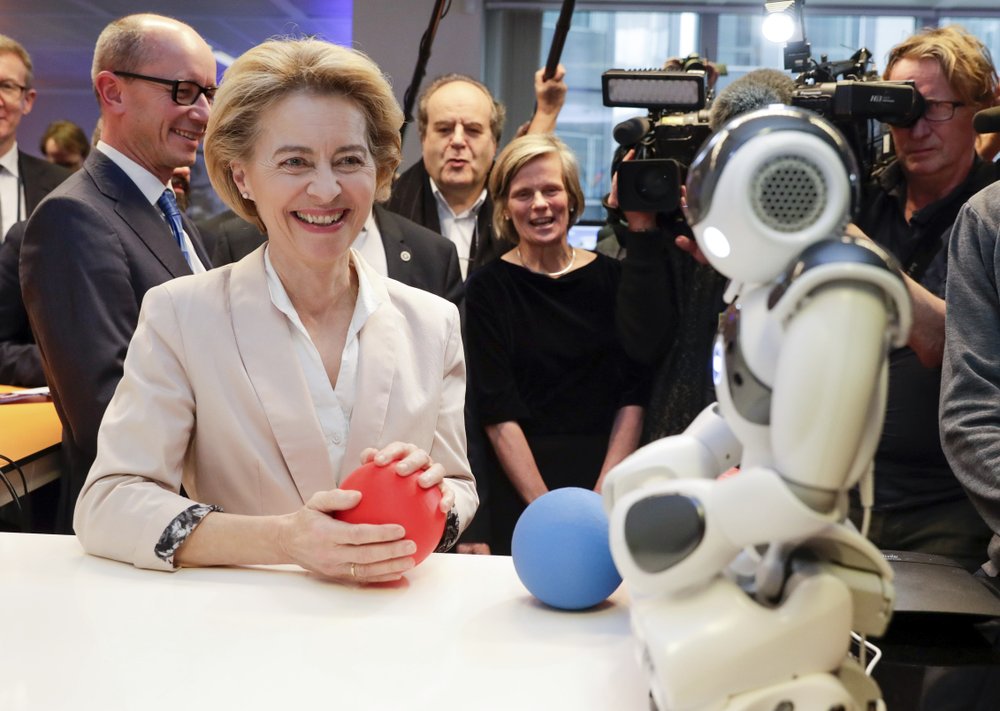 President of the European Commission Ursula von der Leyen looks at the invention 'Do you Speak Robot?' at the AI Xperience Center at the VUB (Vrije Universiteit Brussel) in Brussels, Tuesday, Feb. 18. 2020. (Photo: AP)

The European Union unveiled proposals Wednesday to regulate artificial intelligence that call for strict rules and safeguards on risky applications of the rapidly developing technology.

The report is part of the bloc’s wider digital strategy aimed at maintaining its position as the global pacesetter on technological standards. Big tech companies seeking to tap Europe’s vast and lucrative market, including those from the US and China, would have to play by any new rules that come into force.

EU leaders, keen on establishing “technological sovereignty,” also released a strategy to unlock data from the continent’s businesses and the public sector so it can be harnessed for further innovation in artificial intelligence. Officials in Europe, which doesn’t have any homegrown tech giants, hope to to catch up with the U.S. and China by using the bloc’s vast and growing trove of industrial data for what they anticipate is a coming wave of digital transformation.

They also warned that even more regulation for foreign tech companies is in store with the upcoming “Digital Services Act,” a sweeping overhaul of how the bloc treats digital companies, including potentially holding them liable for illegal content posted on their platforms. A steady stream of Silicon Valley tech bosses, including Facebook CEO Mark Zuckerberg, Google CEO Sundar Pichai and Microsoft President Brad Smith, have visited Brussels in recent weeks as part of apparent lobbying efforts.

If the tech companies aren’t able to build systems “for our people, then we will regulate, and we are ready to do this in the Digital Services Act at the end of the year,” he said.

The EU’s report said clear rules are needed to address “high-risk AI systems,” such as those in recruitment, healthcare, law enforcement or transport, which should be “transparent, traceable and guarantee human oversight.” Other artificial intelligence systems could come with labels certifying that they are in line with EU standards.

Artificial intelligence uses computers to process large sets of data and make decisions without human input. It is used, for example, to trade stocks in financial markets, or, in some countries, to scan faces in crowds to find criminal suspects.

While it can be used to improve healthcare, make farming more efficient or combat climate change, it also brings risks. It can be unclear what data artificial intelligence systems work off. Facial recognition systems can be biased against certain social groups, for example. There are also concerns about privacy and the use of the technology for criminal purposes, the report said.

Human-centered guidelines for artificial intelligence are essential because “none of the positive things will be achieved if we distrust the technology,” said Margrethe Vestager, the executive vice president overseeing the EU’s digital strategy.

Under the proposals, which are open for public consultation until May 19, EU authorities want to be able to test and certify the data used by the algorithms that power artificial intelligence in the same way they check cosmetics, cars and toys.

It’s important to use unbiased data to train high-risk artificial intelligence systems so they can avoid discrimination, the commission said.

Specifically, AI systems could be required to use data reflecting gender, ethnicity and “other possible grounds of prohibited discrimination.”

Other ideas include preserving data to help trace any problems and having AI systems clearly spell out their capabilities and limitations. Users should be told when they’re interacting with a machine and not a human while humans should be in charge of the system and have the final say on decisions such as rejecting an application for welfare benefits, the report said.

EU leaders said they also wanted to open a debate on when to allow facial recognition in remote identification systems, which are used to scan crowds to check people’s faces to those on a database. It’s considered the “most intrusive form” of the technology and is prohibited in the EU except in special cases.