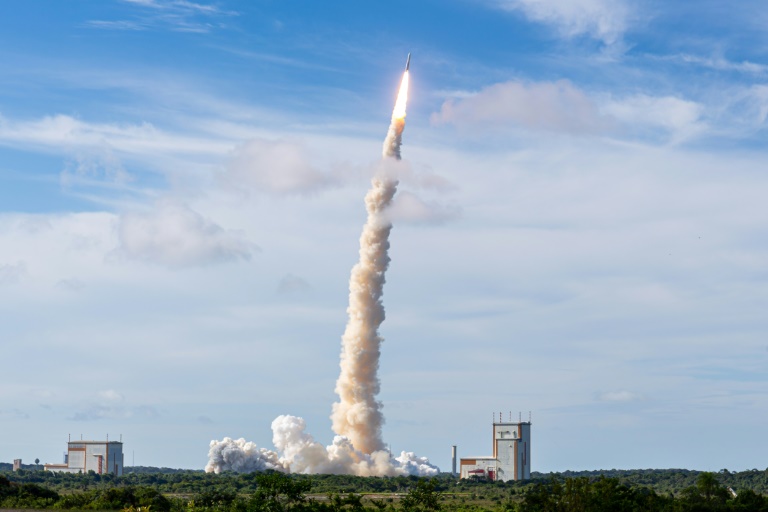 The first Ariane space rocket lifted off over the forests of French Guiana 40 years ago, enabling Europe to at last take its place as an independent player in the international race for space.

Following a number of delays and technical setbacks, Ariane 1 finally left the launch pad in Kourou at 2:13 pm local time on December 24, 1979.

Its maiden flight was a so-called qualification flight, meaning it was not carrying any satellite to put into orbit.

But at the launch, and "during the successive ignitions and separations of different parts of the rocket, there were cries of joy from spectators as the Ariane rose in the clear sky above Guiana," AFP's special correspondent wrote at the time.

The control room erupted with applause when the then head of France's CNES National Centre for Space Studies, Yves Sillard, declared the mission a success, "without even waiting for the orbiting diagnosis," the AFP article stated.

"It was a complete success. It triggered inexpressible joy," Sillard said in an interview with AFP four decades after.

"There was laughter and tears," recalled the launch centre's former head of operations, Guy Dubau, visibly moved even 40 years on.

The teams involved in the project had come a long way: just a few days earlier, on December 15, to everyone's dismay, the rocket failed to take off after ignition due to an unanticipated problem with setting parameters.

"We had absolute confidence in these engines," says Dubau. The failure "dealt a body blow to the 150 people working in the launch centre".

There were only nine days left to fix the problem.

"We had to work around the clock. We even set up a small dormitory in the centre," Dubau says.

Then, in a final attempt on Christmas Eve, Ariane lifted off.

"It was a miracle. Two hours more and we would have had to bin the rocket launcher," Dubau said.

Sillard said that if it had failed, "it could have dramatic consequences, and might have even led to the project being abandoned altogether."

That was because Europe was still smarting from the fiasco of an earlier project.

The Europa satellite launcher, developed in the 1960s, failed because of a lack of coordination between the participating countries and the absence of a single overall project manager.

The Europa programme was abandoned in 1973, the same year that the European Space Agency (ESA) was set up.

From then on, the management was entrusted to CNES, which contributed more than 60 percent to the new project.

The stakes were high: the United States had just launched its space shuttle programme, claiming launch costs would be "five times cheaper than conventional launchers and that these would disappear", Sillard said.

Ariane would prove the contrary. But the project was still plagued by an overall climate of scepticism.

Under French stewardship, more than 50 companies from 10 different countries worked on developing a new launcher called Ariane, or Ariadne in English, the name of a Greek mythological princess who left a thread to guide Theseus out of the minotaur's labyrinth.

In the same way, the new launcher project would "lead us out of the maze of European talks," said Gerard Brachet, a former CNES engineer who went on to head the organisation.

For the first time, Ariane 1 would break the US hold on satellite launches and Europe officially entered the space race.

For the current president of CNES, Jean-Yves Le Gall, "if this launch hadn't taken place 40 years ago, we wouldn't have the European space industry that we have today."

Overall, the Ariane project has been a success and there have been five generations of rockets to date, despite some setbacks, such as the explosion of the first Ariane 5 rocket in flight.

Between then and now, the load transported by the rockets has increased tenfold, says Stephane Israel, the president of Arianespace, the company responsible for marketing the launcher.

But in recent years, Ariane has come to face much fiercer competition, particularly from American firm Space X with its reusable launcher.

Europe is fighting back with its Ariane 6, due to take off in 2020.

With much more competitive manufacturing costs, the new generation launcher will have a re-ignitable engine enabling several charges to be placed in different orbits during the same mission.

And a potentially reusable motor, Prometheus, is also in the pipeline.