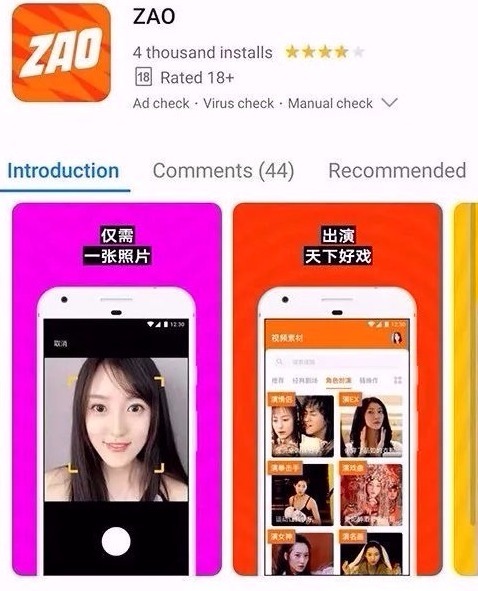 A mobile application that enables users to appear as celebrities in hit movies or TV series has been widely accused of excessively collecting personal information, stirring public concerns over privacy and the rights to one's image.

The app, dubbed ZAO, or "make" in Mandarin, allows users to upload photos of their faces and swap them with the faces of celebrities in blockbusters or hit TV series by using artificial intelligence.

It attracted a large number of netizens soon after its debut on Friday night, but many began to worry if their personal information would be disclosed and used by criminals amid the trend of facial recognition payment.

The platform said on Sunday on its Sina Weibo account that "we fully understand your concerns about privacy issues. We have received the questions you have raised and will correct the parts that were not well-considered. It will take some time."

The app's sharing link on WeChat, a Chinese social network app, has been shut down, and its web page said that "the page has security hazards and has received many complaints. In order to maintain a good internet environment, access has been stopped."

The app also modified its user agreement on Saturday, adding a special notice in the front that states content will not be used for other purposes and can be removed from the server.

The original agreement, which sparkled wide controversy online, said "before you upload or post any content, you agree to grant ZAO, its affiliates and ZAO users worldwide the right to irrevocably use your original photo, synthesized photo and videos for free and for good … and to make changes to the portraits of the original holders."

ZAO became a sensation overnight. Since Friday, social media users have posted videos starring themselves on various digital platforms,－so many that the server was almost paralyzed, the app said on Weibo on Friday night, adding that they probably would have to make stricter traffic restrictions the next day.

On the app, users can choose from a pool of video footage and replace a star's face with their own by uploading their own high-definition photos featuring a full-frontal shot of their faces.

Then they need to verify their faces following a string of instructions that require them to open their mouths or lift their heads, for example, to make sure the face is really theirs.

However, many users noticed the user agreement appeared unreasonable.

"The clauses require the users to fully authorize the image right to the platform … You can't control what they are going to do with your portrait," a Weibo user named Tone2 said.

"When you grant authorization to ZAO, all the rights of your face are no longer yours," another user named stoneyzombie commented.

As users need to log in with a personal phone number, some fear that once the phone number and facial images are disclosed, "criminals can directly talk to your family by using some technical synthesis," an unidentified Weibo user said.

"The clauses don't have any legal effect," said Zhu Wei, an associate professor at China University of Political Science and Law, adding that it is illegal for the company to create such a user agreement when it clearly knows the risks of people taking advantage of the information to do "bad things".

"The infringement of the right to your image is just one part," he said. "People are using a mobile client that involves information about personal identity, property, scan codes and mobile payments, and they can't see exactly what information is obtained by the app. So it is very dangerous."

Wang Sixin, a professor of internet law at Communication University of China, said the law stipulates that digital platforms should be completely responsible for their content.

Such applications provide conditions and technical availability to the possibility of abusing and infringing on personal rights, and "as long as there is an infringement, the platform will be held accountable," he said.

He added that such clauses are "invalid and clearly unfair" when the platform tries to shake off all its obligations while passing all of them on to users.

ZAO is not the first mobile application to let users play around with their faces. Late last year, an app called Zepeto, developed in South Korea, became popular in China for creating an animated version of users by taking a selfie. The Russian-developed application Face-App also uses artificial intelligence to transform uploaded personal faces.