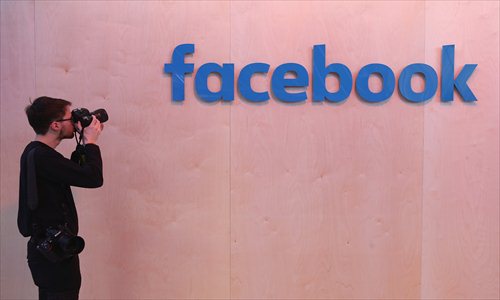 A photographer snaps a photo of the Facebook logo. (Photo: Global Times)

"I welcome this move by Facebook. I think [it shows] the Western media is finally waking up to the fake news that the Epoch Times writes. And hopefully this is the start of Western media organizations realizing that the Epoch Times is just a cover for anti-China propaganda," Campbell Fraser, a professor at the Griffith University in Australia, told the Global Times on Friday.

Fraser has been harassed by the Falun Gong over the past three years after he exposed the rumors. "I have had to move to a secret address for my safety. My wife feels unsafe because of this," he said. The Epoch Times is attempting to use social media manipulation, he added.

Facebook announced on December 20 that it has removed more than 900 accounts, groups, and pages from its own platform, including Instagram, for using fake accounts to mislead users. The banned accounts, groups and pages were associated with the Beauty of Life network, which is an offshoot of the Epoch Times, Forbes reported.

Epoch Media Group, the owner of the Epoch Times, is tied closely to Falun Gong.

These fake accounts promoted anti-Communist messages by fabricating rumors. Some contents in the Beauty of Life pages were consistently hostile toward China, often accusing China of interfering in the elections of Taiwan island and alleging that the Communist Party of China is spearheading World War III.

Some posts focused on the positive coverage of US President Donald Trump and his supporters.

Fraser said he has regularly noticed these fake accounts run by the Epoch Times. They were trying to deceive the world into thinking that Falun Gong has many members outside of China by using AI technology to create profiles with Western faces. "This is another example of fake news," he said.

He told the Global Times that an important reason for Falun Gong to use accounts with a Westerner's profile photo is because "they are trying to give the impression that they are a powerful international organization. In fact, they are not."

Huang Chao, an associate professor at the School of Philosophy at Wuhan University, told the Global Times on Friday that "Falun Gong, the cult, is very good at manipulating the media, especially new media, to carry out propaganda and smear China."

The use of AI technology makes it more difficult and deceptive to identify the cult. "Therefore, there must be some specialized studies to analyze the cult's manipulation of media and also the new media," he said.

Huang pointed out that Facebook has been affected by ideology and prejudice. If Facebook cannot deter the existence of these cults, it will certainly meet backlash.

Rumors that slander Hong Kong police and distort the facts about Xinjiang Uyghur Autonomous Region are also being circulated widely on Facebook. Hong Kong police have requested the US firm to remove posts containing defamatory or unfounded allegations about their handling of riots in October.

Despite spreading rumors to smear China's image, these accounts are also actively involved in the political battles in the US, Huang noted. "They participate in US politics in a deceptive way for their own interests and they try to win support of Trump by using unscrupulous means."

While the Epoch Times denied that they are behind these fake accounts, Facebook said in a statement, "Our investigation linked this activity to Epoch Media Group, a US-based media organization, and individuals in Vietnam working on its behalf."

"Cults never admit that they have done anything wrong, no matter how strong the evidence is. This is what they always do," Huang said.