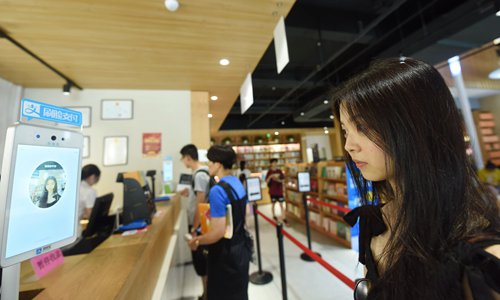 A customer uses a facial-payment system supported by Alipay technology at a bookstore in Hangzhou, East China's Zhejiang Province, on July 17, 2019. (Photo: IC)

Inside Beijing's downtown area, Xiao Ming, a white-collar worker, was paying for his lunch at a Yoshinoya restaurant and was quick to notice a flat screen displaying the WeChat logo with a facial-payment function.

"Not so many people use it," he was told by the cashier who had seen his inquisitive look.

Indeed, just as facial payment is beginning to make its debut in China's retail stores, some media outlets have pointed out the unpopularity of this tool, primarily due to consumers' concerns over privacy.

Although sales volumes handled by smart payments, inlcuding facial payment and payments in self-service shops, increased by over 90 percent during the National Day holidays, according to a report by Alipay, still hold consumers' concerns about facial-payment technology.

China National Radio reported on October 8 that the utilization rate for terminals seems to be low, citing vendors who have upgraded their point-of-sale gear.

A number of consumers have also expressed their concerns over the safety of such hardware. Vendors, on the other hand, are worried that the deposit payment required for the upgrade may not be a worthy investment and that unnecessary trouble may arise from the use of facial-payment technology.

Alipay plans to land 1 million terminals across China, according to the CNR report.

This was followed by an opinion piece on Nanfang Daily, arguing that a cautious stance should be taken against facial payment. The article described how faked facial graphics had successfully unlocked some payment systems, arguing that if biometric data is lost, people's privacy will be compromised.

The article argued that tech firms, amid their celebrations of this cutting-edge technology, may overlook responsibility in favor of benefits.

Industry insiders and analysts contest that facial payment is new, and it needs time to grow. However, optimistic observers said the new payment method incorporating facial-recognition technology will gain a strong foothold eventually, winning over the market within the next two to three years. It will coexist with existing payment tools.

Facial-recognition payment is touted as one of the leading cutting-edge technologies in China, and it gained serious recognition after Alipay and WeChat Pay, the country's prevailing online payment service providers, began to drive growth in the sector by offering vendors their terminals from the end of 2018.

Alipay, one of China's most popular mobile-payment systems, run by Ant Financial, launched its Dragonfly facial-recognition-powered point-of-sale (POS) system in December 2018 and plans to spend 3 billion yuan ($448 million) to promote the new system across the country, according to media reports.

WeChat, the dominant social-networking app in China, is run by internet giant Tencent. The company has since provided thousands of machines to the market, according to an email statement sent to the Global Times. WeChat has developed 85 types of facial-recognition hardware with its partners.

Analysts said the cold welcome for facial-payment came down to the issue of trust.

Lu Yanxia, assistant research head of artificial intelligence with International Data Corp, told the Global Times that the seeming unpopularity of facial payment stems from the currently imperfect technology and the fact that scanning QR codes has been convenient enough for most users.

The questions on consumers' minds are, "Will my face be obtained by the facial scanner if I overstep the queue and then end up paying for the customer before me?" and "How much faster can this new technology catch up with with QR scanning?" Lu told the Global Times over the weekend.

Liu Zhao, head of biometrics at Alipay, told the Global Times via an emailed statement that, "Running into some difficulties is unavoidable when a new technology first finds its way into the market."

Liu said that even mobile payment, now prevalent in China, had to go through a testing period before being accepted by the public.

Alipay has attached great importance to privacy to follow a minimum-use principle, and introduced a three-dimensional camera system to detect "fake faces" and an insurance system to compensate customers in case their accounts are stolen, noted Liu in the statement.

For Tencent, which runs WeChat Pay, the company said in an emailed statement to the Global Times that it does not view facial-payment as a standalone function but as an alternative to QR scanning, and the company believes vendors could experience enhanced efficiency in membership promotion with the new technology.

CloudWalk, born out of the Chongqing Institute of the Chinese Academy of Sciences, was founded only in 2015 and has already established itself as a major facial-recognition tech supplier.

Lu said that despite the initial rollout, it can hardly be said that facial-payment retail terminals are arriving on the market en masse, so it is still difficult to determine market reaction for the new technology.

Analysts said the current disappointment may rise from the high expectations of the technology's promoters, and that what is needed is time and communication.

They noted that widespread applications in urban infrastructure and transportation, after they have materialized from the current planning phase, will create a benign environment for the promotion of facial-payment technology.

Zhang Yi, CEO of Shenzhen-based iiMedia Research, said that despite the initial "cold welcome" for facial payment, facial-recognition tech will see extensive expansion within the next two to three years.

Cities in coastal areas including Shenzhen and Shanghai are steadily deploying facial-recognition hardware at metro stations and airports. In some cities, the procurement level has reached billions of or tens of billions of yuan, Zhang revealed.

"These efforts from the government and the public sector will boost consumer confidence in facial-recognition technology and its ability to protect biometric and critical information," Zhang told the Global Times over the weekend.

Efforts to formulate regulations are needed as this technology finds its roots, Zhang noted.

Xia said that due to high input from promoters, he believes the situation can be reversed in a relatively short period. It will only be an issue of pace; ultimately this tech will establish itself in retail outlets.

Zhang said that facial payment is more convenient and fun than payment with a fingerprint, numerical or diagram password.

"There could be some hiccups during its growth path, but as a trend, it will be irresistible," Zhang said.