TECH Fast-tracking development across the world

Fast-tracking development across the world 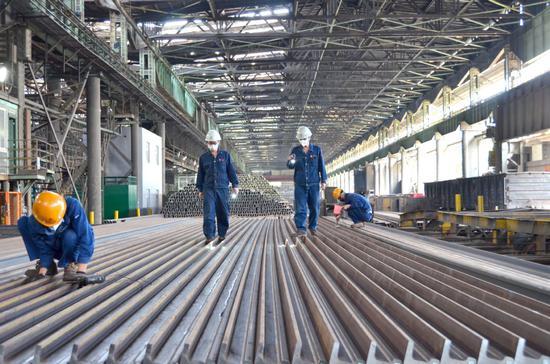 In late November, China shipped its long-length steel rails to Indonesia, for use in the widely anticipated Jakarta-Bandung high-speed railway, or HSR, project.

The shipment marked a significant milestone in China's exports of a full range of products and services related to HSR construction and operations, which are known as one of the country's calling cards.

Made by Pangang Group Co Ltd in Sichuan province, each rail is 100 meters long, making China one of the few countries in the world that can export long-length steel rails.

From Sichuan, they were first transported to Fangchenggang Port in the Guangxi Zhuang autonomous region by railway through specially adjusted carriers, before being cut into 50-meter-long rail pieces for the sea journey.

Experts said China's HSR-related technologies and standards are now widely recognized across the world. In the past, Chinese steel companies often had to produce and export products as per the standards of the United States and Europe. But now, more and more foreign users are accepting Chinese standards.

They attributed China's achievements to outstanding equipment innovation and world-class manufacturing capabilities. Yicai, a Shanghai-based Chinese media group, reported that Sun Zhang, a professor with the Institute of Rail Transit of Tongji University in Shanghai, attributed the confidence in China's HSR to independent innovation.

Guo Hua, deputy head of Panzhihua Steel & Vanadium Co Ltd, a subsidiary of Pangang Group, said: "It's the first HSR project outside China to adopt a complete set of Chinese HSR technology and equipment in accordance with Chinese standards.

"Chinese people always treat others with sincerity, and we are earnest to provide the best products for the Jakarta-Bandung HSR project. Long-length rails have been widely used for more than a decade in China."

Xu Xiangchun, information director and analyst with Mysteel, an iron and steel consultancy, said: "The longer a rail is, the more complicated it is to produce it, due to the higher precision requirements for product specifications."

The 142.3-kilometer-long HSR project, officially launched in 2016, will connect Jakarta, Indonesia's capital, with Bandung, capital of West Java province. The trains on this line can reach speeds of up to 350 km/hour, potentially shortening the travel time between the two cities from more than three hours to just about 40 minutes.

Construction is expected to be completed by the end of this year. The HSR will be the first of its kind in Indonesia as well as Southeast Asia, boosting regional connectivity and facilitating economic and trade activities.

As one of the key projects under the Belt and Road Initiative, it is China's first contracted overseas HSR project to use Chinese standards, technologies, and equipment.

Chinese suppliers are expected to meet the import demand for all construction and operational aspects of the Indonesian project: technical standards, survey and design, engineering and construction, equipment manufacturing, material supply, operations management and personnel training.

Construction has progressed substantially so far. Several tunnels, a major continuous beam, and the first multi-span rigid frame continuous beam for a bridge have been completed, according to the Xinhua News Agency.

On Dec 15, the No 1 Tunnel was successfully holed through in Jakarta, marking a significant milestone in the project construction work.

With a total length of 1,885 meters, the tunnel will play a crucial role in the completion of the HSR construction. The long-length steel rails are key materials for the project construction to proceed.

In 2017, Pangang Group won the exclusive supply contract of the Jakarta-Bandung HSR project after a fierce international bidding competition. It attributed its success to the excellent cost performance of its steel rail products.

The company started producing 100-meter HSR rails that can withstand train speeds of up to 350 km/hour as early as in 2005. Since then, it has been upgrading its production equipment, and research and development facilities, with digital technologies.

China's HSR prowess is a global trendsetter, given the country's lead in technology, safety, reliability, compatibility and cost performance, Sun Zhang of Tongji University told Yicai, adding that the Chinese companies' construction cost works out to only 40 percent of foreign firms'.

Since China completed the construction of its first overseas high-speed railway in Turkey in 2014, which runs between Ankara and Istanbul, its technology and expertise have been exported to many countries, including Indonesia, Thailand and Malaysia.