In the video, Xiao offers New Year’s Day greetings in Chinese, English, French, and Spanish. "My birth represents one of the latest applications of China's advanced AI technology. According to China's latest development plan, innovative technologies such as AI and 5G will be more widely used in the next five to 15 years," she says. 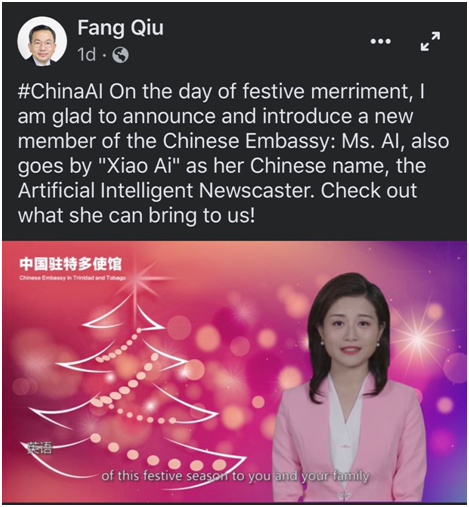 "On the occasion of the arrival of the New Year, I am honored to announce and introduce a new member of the Chinese Embassy," Chinese Ambassador To Trinidad and Tobago Fang Qiu wrote on Twitter.

According to Fang, the Chinese Embassy hopes to create a new platform of "artificial intelligence information announcer" to showcase the bright future of China-Trinidad and Tobago cooperation in scientific and technological innovation, digital economy, and other fields.

Within a day of its release, the video had been viewed nearly 2,000 times online, and was shared and liked.