If you take out an ordinary-looking smartphone and roll it up in front of your friends, you will be the hit of the party. 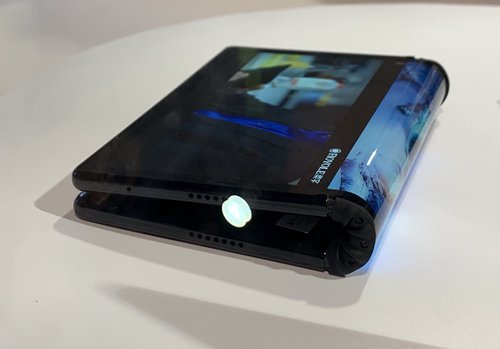 This year will be a big one for folding mobile devices, with several giant smartphone producers racing to release their first folding models. Fast-growing Huawei Technologies is scheduled to unveil its first 5G foldable phone on February 24 at the MWC to be held in Barcelona, Spain, according to a Weibo post by Richard Yu Chengdong, head of Huawei consumer business group.

Another Chinese phone leader, Oppo, told the Global Times on Wednesday that the company has been pursuing the necessary research for some time. Oppo's vice president Shen Yiren recently also told reporters with njcjnews that the foldable screen will provide large imagining space for future mobile phones.

One of Huawei's main competitors, Samsung Electronics Co, said on its Twitter account that "The future of mobile will unfold on February 20, 2019." In an advertisement released on February 2, the screen size of the prospective phone is 7.3 inches, and the size after folding is shown as 4.58 inches.

Analysts told the Global Times it may be hard for Huawei to surpass Samsung in sale numbers of foldable smartphones, since Samsung makes its own screens and has global sales channels that Huawei can't catch up with at present.

"South Korean and Japanese mobile phone companies have their own screen manufacturing facilities, which offers advantages in terms of the design and the flexibility of their screens. Most Chinese phonemakers have to rely on screen supply chains," Li Yi, a senior research fellow at the Internet Research Center under the Shanghai Academy of Social Sciences, told the Global Times on Wednesday.

According to a survey carried out by wallstreetcn.com recently, more than 66.7 percent of respondents showed no interest in buying folding phones.

"Maybe starting from foldable phones, Apple could fall behind in the contest," said Wang Yanhui, head of the Shanghai-based Mobile China Alliance. Apple has not revealed any information on folding phones so far.

Li and Wang agreed that foldable phones will attract buyers and stimulate consumption once they hit the market.

"So far, all the mobile devices' screens have not 'wowed' consumers as Steve Jobs originally did. The market needs a change, and the foldable screen is a breakthrough," Li said.