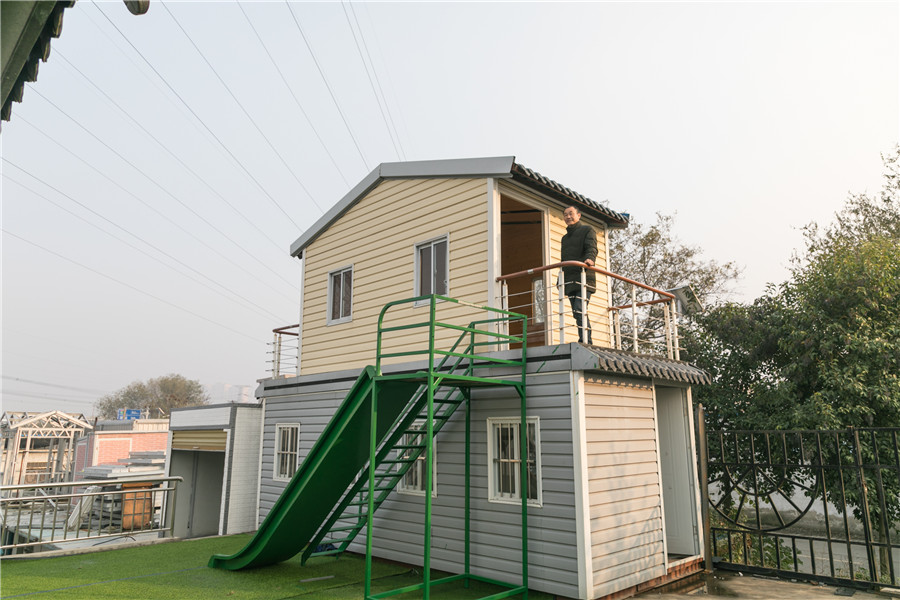 Chen Junhu stands on the balcony of a foldable house he designed and built. (Photo: China Daily)

What's the shortest time a home can be erected on a flat open space? Thirty minutes may be the answer. It takes only three or four workers this amount of time to construct a "foldable" house which can be ordered online, delivered by truck and packed away at a future date.

Chen Junhu, a 50-year-old entrepreneur from Anhui province, designed the collapsible cabins that can be erected anywhere without traditional concrete foundations.

One of Chen's most popular foldable designs arrives as a flat pack. Similar to a paper lantern effect, the roof is pulled up, snapping two hinged walls into place. The two other walls, stored in the floor space, are pulled up and locked into the joints of the roof and walls.

Other designs involve walls and roofs being folded out from a prebuilt central rectangular structure placed on-site.

Chen said the maximum area of his movable, collapsible homes is 36 square meters. "The scale of the house relies on how much material a 6.8-meter truck can carry," Chen said.

The idea of a foldable house was hatched in 2014, when Chen was working as a welder in Huainan, Anhui, and saw the demand for temporary housing for migrant workers at construction sites in his neighborhood.

"I'd worked in masonry before," he said.

"The prefab houses would be thrown away and become waste when the work was done. It's economical to offer foldable and recyclable houses for workers in a construction project because they can reuse the modules when they shift to other sites."

His vision of improving the accommodation of migrant workers and reducing waste produced by the discarding of the prefabs, took time to realize. Though he had experience in the field, the junior high school graduate had no professional training in the building industry.

"I sketched the folding house at first, but clients wouldn't take a serious look at my draft because it's not a standard design," Chen said.

He bought a computer in 2014 and learned to use basic design software from books and videos. Chen applied for a patent for the foldable house the same year.

He sells his foldable houses on his online store on Taobao, China's largest e-commerce platform. Customers make orders online and outline their requirements to Chen and his team. In addition to fittings and utilities－such as windows, doors and electricity－lamps and other interior decorations can be included.

"We have discussions with customers and design the collapsible houses according to the climate and customs of the region. The designs for people in the northern and southern parts of China are different," Chen said.