Global companies have played a vital role in advancing the big data industry of Southwest China's Guizhou Province, known as "China's Data Valley," but they are not expected to form monopolies in local businesses, a local official told the Global Times. 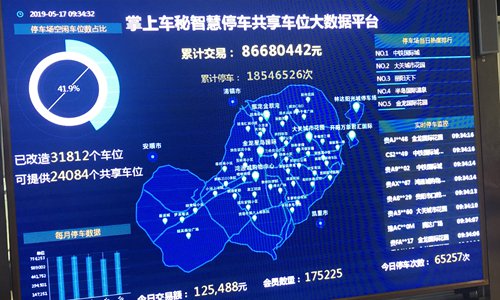 On July 12, 2017, Apple announced it would build its first data center in Guizhou. Since February 2018, the iCloud services of Apple in China have been operated by Guizhou-Cloud Big Data Industry Co. Experts have predicted that the iCloud service alone can bring over $1 billion in revenue to Guizhou each year.

International companies played a vital role in advancing the growth of Guizhou's big data industry as they not only helped drive the local economy, but also encouraged innovative development by bringing in their technology, noted Xu Hao, vice mayor of Guiyang, the provincial capital.

Guizhou's cooperation with Apple set a precedent for cloud services across the country and has been an important role model for the province in building a system for such services in the future, Xu told the Global Times over the weekend.

After the local government announced its decision to make Guiyang into a vital base for information and software outsourcing services, many well-known overseas enterprises such as Dell and IBM followed as they saw the large growth potential of local industries, Xu said. "They will have a large impact on the whole big data industrial ecology in the province."

The firm has conducted three signal improvements tests at more than 20 intersections in Guanshanhu and Huaxi districts in the city to optimize traffic lights via traffic simulation platforms.

The project helped increase the average traffic time at intersections by 10 percent.

In the future, the company will further expand cooperation in sectors such as the Internet of Tings to help provide resolutions for city ecological supervision, and develop artificial intelligence cloud services, according to local government.

The main business revenue of firms in the big data sector in Guiyang exceeded 100 billion yuan in 2018, up 22.4 percent year-on-year. And the new business sectors represented by the big data industry contributed 21 percent to the economic growth of Guiyang in 2018.

"But we don't hope these big firms will form monopolies in some industries or certain applications," Xu said.

"We also encourage innovative small and medium-sized enterprises to join the business in related sectors, which is also a highlighted focus," said Xu.

In January 2012, the State Council, China's cabinet, issued a notice on further promoting sound and rapid economic and social development of Guizhou, in which developing emerging industries, such as next-generation information technology, was made clear.

Closely following the national development strategy, the province has become a pacesetter in developing big data since 2013.

The China International Big Data Industry Expo 2019, also known as 2019 Big Data Expo, will be held from May 26 to 29 in Guiyang. It is the fifth year of the expo.

Over 100 overseas companies from 21 countries including Russia, the UK, the US and India have confirmed their attendance at the upcoming expo.