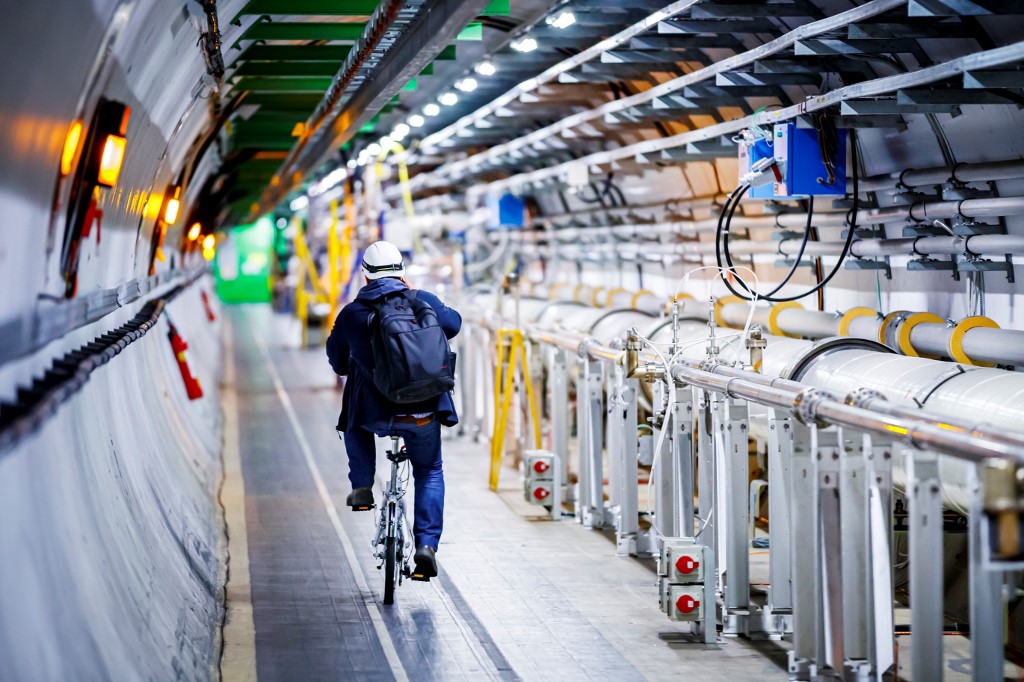 A man rides his bicycle along the beam line of the Large Hadron Collider (LHC) in a tunnel of the European Organisation for Nuclear Research (CERN), during maintenance works on February 6, 2020 in Echenevex, France, near Geneva. (Photo: AFP)

GENEVA, Dec. 5 (Xinhua) -- Even after decades of astrophysical and cosmological research and experiments, the biggest mystery in the universe - the elusive substance of dark matter -- still remains a head scratcher, the head of the European Organization for Nuclear Research (CERN) told Xinhua.

Fabiola Gianotti, director-general of CERN, said in a recent interview that CERN has been breaking new ground in the search for dark matter, but that scientists are yet to accomplish what would be one of the most significant discoveries in physics.

"Today, we know that some 25 percent of the universe is made up of a form of matter which is not known, and therefore it's called dark matter. We still don't know the nature of the particle that makes up the dark matter," she told Xinhua.

"At CERN, with the Large Hadron Collider (LHC), which is the most powerful accelerator ever built, we have been looking for dark matter particles, different particles and with different processes, but so far we could not yet find any such particle."

Galaxies in the universe rotate with such speed that the gravity generated by their observable matter could not possibly hold them together. That's why scientists believe that an invisible and unknown matter is at work, giving them the extra mass they need to stay intact.

Still, more is unknown than is known.

"Given that our knowledge of the universe today is at the level of five percent, meaning that only five percent is made of the matter that we know, the remaining 95 percent is a question mark," Gianotti said.

Asked about what finding the dark matter particles would mean for the future of humanity and the universe, Gianotti said: "If humanity was to discover the composition of dark matter, it means that our knowledge of the universe would increase from the current five percent to some 30 percent. So, this would be a great step forward in the fundamental physics and understanding the universe itself.

"The LHC is the best instrument we have for a certain class of hypothesis for dark matter particles, not for all of them. Really, the rush across the world to understand the composition of dark matter is one of the most interesting and exciting experimental endeavors," she stressed.

Founded in 1954 and based near Geneva, CERN is the largest particle physics laboratory worldwide and one of the biggest centres for scientific research.

Its physicists and engineers use some of the world's largest and most complex scientific instruments, such as particle accelerators and detectors, to study the basic constituents of matter and find out what the universe is made of and how it works.

Asked about how close CERN was to finding dark matter particles, she said: "This is a very difficult question because I think the most honest answer is: we do not know," Gianotti told Xinhua. "Because we don't know the features of the particles that make up the dark matter. They could be very heavy particles or very light particles, we don't know."

Gianotti also said that China's contribution to CERN has been significant over the years.

"Chinese scientists have been involved in many of the CERN projects, including the previous big collider, the large electron-positron collider. But also now, they are involved in all four Large Hadron Collider experiments, a total of 600 scientists," she said.

"They also contribute to the upgrade of the Large Hadron Collider by building super conducting magnets based on new advanced technologies. It's a very good partnership based on intellectual and scientist contribution but also technology and industry contributions," she added.

Cooperation between China and CERN began in the 1970s and initially focused on accelerator technology and theoretical physics.

In 1981, CERN and the Chinese Academy of Sciences signed a memorandum of understanding, followed by an international cooperation agreement in 1991 to further develop scientific and technical cooperation.

CERN currently has 23 member states, which contribute to the budget of the organization.

Gianotti said the budget has stayed stable in recent years and amounts to some 1.6 billion Swiss francs (1.8 billion U.S. dollars) a year.

Asked about the impact of COVID-19 on the funding pipeline, she said: "Of course, COVID-19 has triggered a health crisis and we know there is an economic crisis following it. At the moment, the member countries are very committed to CERN.

"We have no signs for the time being of any changes in their contributions. But, of course, it is too early to tell, we will see next year how the economic situation develops in Europe."

CERN has also received funding from the European Commission's research and innovation programme, Horizon 2020, for some of its projects.