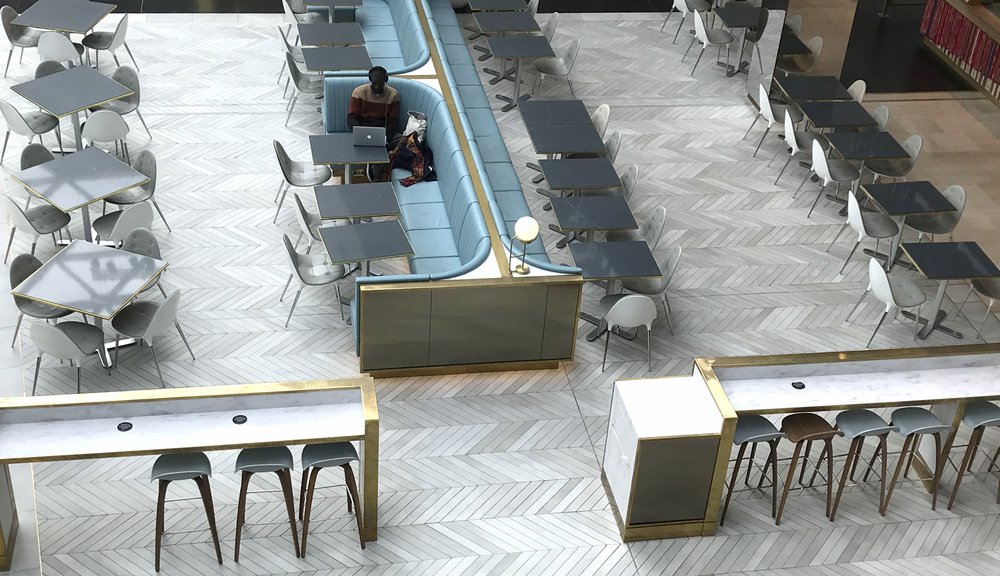 Governments and central banks are scrambling to find ways to keep businesses from going bankrupt as the virus outbreak grinds the world economy to a halt.

A day after Wall Street endured its worst daily drop since the crash of 1987, European markets wavered, while U.S. stocks recovered about half of their losses. There is tremendous volatility, with the extent of economic damage from the pandemic still anyone’s guess. Factories are closed, retail stores are closed, travel has ground almost to a halt and billions of people are sheltering at home, going outside only to find essential supplies.

Here is a look at how the outbreak is reshaping the global economy and how individuals, businesses and governments are responding.

GOVERNMENT AND CENTRAL BANKS: Where to begin is an enormously complex question. Big industry and small business are looking at a complete, or nearly complete halt to operations. Restaurants that have been shuttered employ hundreds of thousands of people. Airlines are grounding flights, meaning no crews are needed. The dilemma afflicts every sector of the national and global economy. The risk of frozen economic activity will ripple outward, from the banking and mortgage industry, to services ranging from dog walking to doctors visits.

The U.S. Federal Reserve created a lending facility to buy short-term loans from banks and companies to ease the flow of credit as the economy grinds to a halt. The Fed announced Tuesday that it’s reviving a program it first used during the 2008 financial crisis to unclog a short-term lending market for what is known as “commercial paper.” Large businesses issue commercial paper to raise cash to meet payrolls and cover other short-term costs. Borrowing rates in the commercial paper market have been spiking as more companies have sought to raise cash in the expectation that their revenue will plunge.

The White House is proposing a roughly $850 billion emergency economic rescue package for businesses and taxpayers. Treasury Secretary Steven Mnuchin will outline the package to Senate Republicans at a private lunch, with officials aiming to have Congress approve it this week. It provide relief for small businesses and the airline industry and include a massive tax cut for wage-earners. Two people familiar with the request described it to The Associated Press on the condition of anonymity because they weren’t authorized to speak publicly.

The British government has unveiled a massive economic support package that it hopes will contain some of the damage of the coronavirus outbreak. Prime Minister Boris Johnson said his government will “act like any wartime government and do whatever it takes to support the economy.” Among a raft of measures, Treasury chief Rishi Sunak said the government would provide a 330 billion pounds ($405 billion) worth of government-backed loans and guarantees for small and large businesses, which is equivalent to 15% of the country’s annual GDP. He said the scheme should be up and running by the start of next week.

Spain will mobilize 200 billion euros or the equivalent to one fifth of the country’s annual output in loans, credit guarantees and subsidies for workers and vulnerable citizens, Prime Minister Pedro Sánchez announced Tuesday.

Greece will provide 2 billion euros to help businesses hit by a loss of revenue due to the conronavirus outbreak, while the state will pay part of employees’ salaries in affected sectors.

The Dutch government has announced a multibillion-euro (dollar) raft of measures to prop up businesses and workers hit by the coronavirus and the restrictive measures put in place to slow its spread. The support package includes paying up to 90% of the salaries of staff at businesses hit by the virus for the next three months, financial support for the self-employed and making it easier to delay paying taxes.

New Zealand vowed Tuesday to spend billions of dollars supporting distressed companies with its economy headed for recession. The stimulus package is equivalent to 4% of GDP.

Venezuela is seeking an emergency $5 billion loan from the International Monetary Fund, appealing to an institution it has long denounced to cope with the fallout from the new coronavirus on its already collapsed oil economy.

STORES, RESTAURANTS AND OTHER PUBLIC PLACES: The places that we once gathered, save for public areas, are now largely closed. That number of retailers, national fast food chains movie theaters and malls that are locking their doors continues to grow.

Apple said over the weekend that it would close all of its stores until March 27. It said Tuesday that those stores will remain closed indefinitely.

McDonald’s and Wendy’s say the dining areas of all North American restaurants are closing. Takeout or delivery is still available at most locations, though some chains have declared out an outright shutdown in areas where clusters of coronavirus have emerged, including Starbucks. McDonald’s said in a regulatory filing Tuesday that dining areas in France are closed. In Spain and Italy, both hard hit by COVID-19, all restaurants are completely closed. The Chicago fast food giant said 95% of its 3,300 restaurants in China are now open.

The Mall of America, the nation’s largest shopping mall, will close Tuesday and its doors will remain locked until at least April.

Food delivery company DoorDash is waiving fees for restaurants, hiring out-of-work waiters and delivering food to the needy as the new coronavirus radically changes the restaurant industry. The San Francisco company will allow independent restaurants sign up for its delivery service for free through the end of April.

Ralph Lauren and Foot Locker announced nationwide closures of stores in regulatory filings. They follow Patagonia, Under Armour, Urban Outfitters, REI and others in doing so.

With so many people stocking, and overstocking pantries, Dollar Tree temporarily suspended online ordering to ensure the shelves in its stores are loaded.

U.S. movie theaters have closed nationwide, turning dark nearly all of the country’s 40,000-plus screens in an unprecedented shutdown. The largest chains had tried to remain open even as Hollywood postponed upcoming releases, including the new James Bond film. But after President Donald Trump on Monday urged against gatherings of more than 10 people, AMC Theaters, the nation’s largest chain, said Tuesday its theaters would close.

BIG TECH: The biggest tech companies in the world are banding together to combat misinformation about the pandemic and also fraud. Facebook, Google, Microsoft, Twitter, Linkedin, Reddit and YouTube said in a joint statement that they will also attempt to disseminate across their platforms essential updates from government health organizations. Misinformation and confusion in social media posts have been problematic for years. The spread of the coronavirus has exacerbated the problems for which Facebook and others were lambasted during the 2016 U.S. presidential election.

Facebook says it is giving $100 million in grants — cash and advertising credits — to small businesses to help them during the coronavirus.

SUPPLY AND DEMAND: Amazon, in an attempt to fill its warehouses with toilet paper, hand sanitizer and other items in high demand, said Tuesday that it will limit what suppliers can send to its warehouses for the next three weeks. Among the items that suppliers and third-party sellers can ship to Amazon include canned beans, diapers, dog food, disinfecting wipes, medical supplies and household goods. Items like jeans, phone cases and other non-essentials will not be allowed.

HEAVY INDUSTRY: Ford Motor Co. will shut down all of its vehicle and engine factories in Europe starting Thursday to help contain the coronavirus and because sales are down and parts are running short. The company expects the shutdown to last for a number of weeks, but reopening depends on spread of the virus, national restrictions, parts supplies and dealer stock requirements.

The U.S. factories for Ford, General Motors and Fiat Chrysler remain in operation, but some members of the United Auto Workers union are trying to get the companies to close them soon to help stop the virus from spreading.

Volkswagen announced the closing of most of its European plants for two weeks due to uncertainty about demand for cars and supplies of parts.

Airbus will suspend production at its French and Spanish facilities for the next four days to implement tougher health and safety protocols, including more rigorous sanitation and enforced distancing between workers.

Canada’s second largest airline is suspending all commercial international and transborder flights for a 30-day period as it helps operate rescue and repatriation flights in partnership with the Canadian government. Westjet says it will suspend normal service on Sunday, March 22.

Hong Kong’s Cathay Pacific Airways cut its flight schedule by 90% in April after passenger traffic in February fell by more than half from a year ago.

American Airlines on Monday suspended about 75% of its long-haul international flights and began grounding about 135 planes. It will cut passenger-carrying capacity in the U.S. by 20% in April and 30% in May. Airlines are talking to unions about taking cuts in pay or hours, and some are cutting executive and management salaries.

Southwest Airlines says it is temporarily cutting back on serving snacks and drinks because of the coronavirus outbreak. The airline said Tuesday it has dropped all such service on flights under 250 miles, and starting Wednesday it will offer only snacks and unopened water cans on longer flights to limit the number of objects touched by individuals.

Markets around the world remain highly volatile as traders see a recession growing more likely, if it hasn’t begun already. Tuesday’s 6% gain for the S&P 500 meant it clawed back a little less than half of its Monday decline, its biggest in more than three decades.

Treasury Secretary Steven Mnuchin says financial markets will stay open for people to access their money during the coronavirus outbreak. Mnuchin said at a White House briefing Tuesday that shorter hours may still be necessary. But he says banks and other institutions will not shut down as the U.S. grapples with the pandemic.

DOWNWARD SLOPE: Vail Resorts will close all slopes for the remainder of the ski season. The company announced Saturday that it would shut down its 34 resorts for at least one week.

HOTEL HEARTBREAK: Jon Bortz, CEO of Pebblebrook Hotel Trust, which owns 54 hotels in major cities including New York, San Francisco and Seattle, said occupancy levels have dropped into the single digits. The company has laid off more than 4,000 of its 8,000 employees, and is likely to let go another 2,000 by the end of March, he said. “We are looking at closing the doors at more than half of our properties,” he said. Chip Rogers, president of the American Hotel & Lodging Association, said the hotel industry has already suffered more damage than caused by 9/11 and the 2008 financial crisis combined.