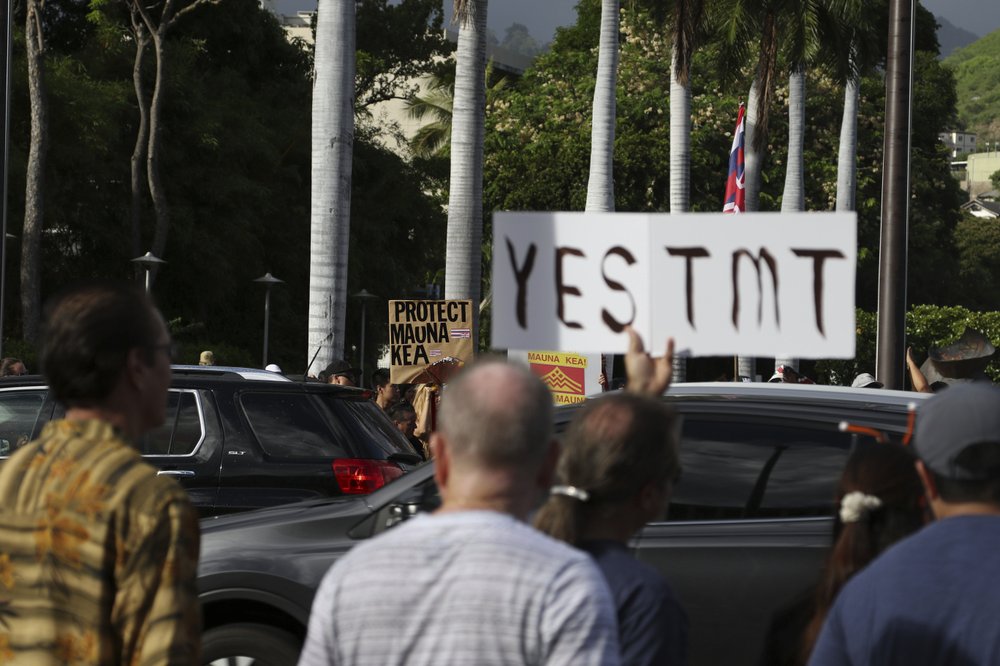 A giant telescope planned for Hawaii’s tallest mountain will enhance humanity’s knowledge of the universe and bring quality, high-paying jobs, supporters said as protesters blocked construction for a second week.

An international consortium plans to build the $1.4 billion Thirty Meter Telescope at the top of Mauna Kea, which some Native Hawaiians believe is sacred. The Hawaii Supreme Court last year ruled the project had a valid permit, clearing the way for construction to begin after a decadelong battle.

Opponents of the telescope have gotten more attention than supporters as they have blocked a road for 11 days to prevent construction crews from starting their work. The protesters say building another telescope on a peak that already has 13 observatories will further desecrate the mountain on the Big Island.

Last weekend, 2,000 people joined the protest camp. Actor Dwayne “The Rock” Johnson visited the protesters this week to declare he stood with them.

But supporters also are impassioned about why they believe the telescope belongs on Mauna Kea, which has the best conditions for viewing the night sky in the Northern Hemisphere.

The telescope is expected to allow astronomers to peer back some 13 billion years in time to shortly after the Big Bang. It’s expected to help astronomers determine whether life exists on planets outside the solar system and better understand fundamental concepts like gravity.

He said people have to learn to share the mountain and there was more than enough space for everybody. Baybayan said he views the summit as a spiritual place but not a sacred one.

The economic benefits are substantial, particularly in a state heavily reliant on low-paying service industry jobs in the tourism business.

The Thirty Meter Telescope is projected to create 300 union construction jobs during its eight- to 10-year construction phase. It’s expected to employ 140 employees when operational.

Hawaii will lose its status as a world leader in astronomy if the telescope isn’t built, said Bob McLaren, the director of the University of Hawaii’s Institute for Astronomy. Existing telescopes may not want to upgrade facilities and make further investments, and it could lead to a downward spiral for the field, he said.

Hawaii would lose employment in science, math, engineering and technology fields, forcing residents with such interests and careers to leave home for work, supporters say.

Having one of the most significant scientific facilities in the world is an incredible opportunity, McLaren said.

“People need to think really hard about exactly why they would want to pass that up. What is it that makes it worth passing that up?” McLaren said.

About 100 to 150 supporters of the telescope gathered for a rally in front of the Hawaii State Capitol during the evening rush hour. They held signs with messages like “Support Culture and Science” and “Move Forward Not Backward” and waved at passing cars. Some drivers honked back in support.

“I’m a strong supporter of the advancement of science and technology. I think it brings a lot of good to humankind,” said retired Navy researcher Tom Strickland. He held a sign that said “In Search of Knowledge” with a drawing of Mauna Kea.

About an equal number of people opposed to the telescope stood on the other side of the street, waving upside down Hawaiian flags and signs saying “Protect Mauna Kea.” Drivers supporting the opponents honked too.