TECH Head transplant is not their plan: Chinese scientist

Head transplant is not their plan: Chinese scientist

Two surgeons from China and Italy claimed a medical breakthrough in the treatment of spinal-cord injuries, although the Chinese scientist denied claims that their ultimate aim was to use the technique to transplant a human head. 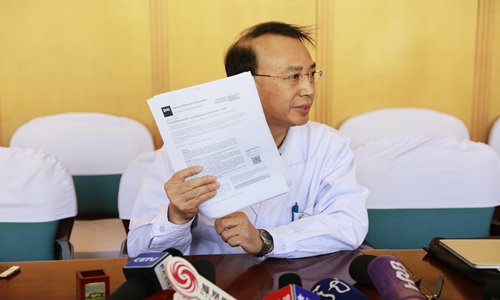 Professor Ren Xiaoping holds a press conference in November 2017, explaining to the media that it is not accurate to call the surgery a "head transplant," and it was only an experiment. (Photo: VCG)

Ren Xiaoping, a professor at Harbin Medical University, and Italian neurosurgeon Sergio Canavero published their latest work in the US-based journal Surgical Neurology International on Wednesday, stating that animals like monkeys and dogs were able to survive after their spinal cords were fully transected and their biological function would recover "a few weeks later," Ren told the Global Times on Friday.Ren claimed that they had fused the spinal-cord by applying a polyethylene glycol substance onto a spinal cord that had been fully severed. It led to motor recovery in mice, rats, and dogs. "This is currently the best recovery method [for spinal cord injury] internationally," he said.He said now they have finished lab trials and looking for global partners to conduct human trials. "We are currently looking for hospitals that are willing to cooperate with us, [hospitals in] any country will do."Ren and Canavero came under the spotlight in November 2017 after they claimed to have conducted the world's first head transplant on a corpse at a Chinese hospital. Experts around the world raised doubts about the feasibility of head transplants as science has not proven it possible to reconnect the severed nerves in a spinal cord, and the ethical issues that come with it. In their published paper, Ren and Canavero said that they have shown that permanent paralysis after a complete transection of the spinal cord can be prevented in part by immediate, topical application of the polyethylene glycol solution in the region of the spinal cord transection.According to Ren, although spinal-cord recovery is the one of the biggest obstacles for head transplant surgery, this "challenge of the century" is not their plan.Western media always want to hype our experiment by describing it as for "head transplantation," but what we really want to do is just to fix spinal-cord injuries. There has been little progress in treating spinal-cord injuries anywhere in the world, Ren said, noting that their trial shed new light on solving the problem, and has been recognized internationally.