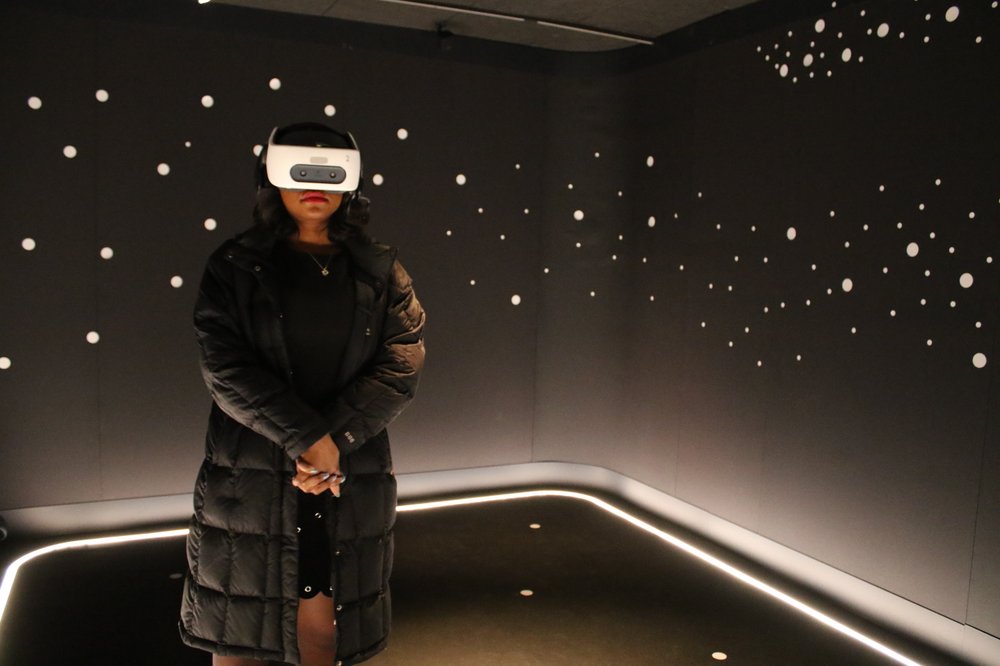 In this Wednesday, Feb. 26, 2020 photo, a visitor experiences "The March" virtual reality exhibit at the DuSable Museum of African American History in Chicago ahead of the project's launch. (Photo: AP)

Imagine being so close to Martin Luther King Jr. as he gives one of the world’s most famous speeches that you notice the creases in his face and then realize the late civil rights leader is looking you square in the eye.

That’s the intense personal moment organizers are striving for with a one-of-a-kind virtual reality exhibit opening Friday at Chicago’s DuSable Museum of African American History. Called “The March,” it captures the 1963 March on Washington during which King delivered his iconic “I Have a Dream” address.

“The speech is so well known and the ways people are used to seeing it is kind of archival, grainy two-dimensional film,” said Mia Tramz, an editorial director of immersive experiences at TIME, which helped create the project. “By being able to see it with your own two eyes and feel like you’re standing there, you not only get the message of the words, but the message of the energy that he put behind those words.”

The project has the rare full backing from King’s estate, which fiercely guards his likeness and speeches. The high-tech effort took years of research on King’s gestures and expressions, as well as interviews with attendees.

Creators said it was inspired by an archive image of King giving a different speech on the National Mall, shot from his perspective looking out. TIME, which features King in a March issue, worked with companies including a production studio run by actress Viola Davis and her husband, Julius Tennon. Davis narrates part of the project.

Visitors start in an dark empty room with audio of people involved in key events leading up to the march. One is Hank Thomas, who was a Freedom Rider — activists who protested segregation by sitting in bus seats reserved for whites and who experienced violence and jail.

After that, attendees are outfitted with heavy virtual reality headsets that block out the outside world and replace it with three-dimensional glimpses of Aug. 28, 1963, on the National Mall. In what sometimes looks like a video game, visitors march along Constitution Avenue and then stand in the crowd of some 250,000.

Then the scenery changes again. Visitors find themselves standing on the steps of the Lincoln Memorial and an arm’s length from King, whose hand gestures and facial expressions are brought to life. After delivering part of the speech, he walks by and locks eyes, a moment creators say is unparalleled.

The permission from King’s estate was also unusual.

Run by King’s children and known to be litigious, the estate closely guards any use of King’s image, name and work. The estate initially balked at plans to put a life-size commemorative King statue at the Georgia Capitol and didn’t grant rights to speeches for the 2014 film “Selma,” which won an Oscar for the best original song and was nominated for best picture.

Tramz declined to discuss how the project got the estate’s backing. Messages left for Atlanta-based Intellectual Properties Management, which manages King’s estate and controls rights to his works and images, weren’t returned.

The experience isn’t for the faint of heart. Participants must sign a liability waiver warning of possible risks, such as dizziness, and there’s a built-in “decompression zone.” The 15-minute experience isn’t recommended for children under 13.

There are also limitations.

Only four people can go through simultaneously and technology-related snags happen. During a media preview attended by the Associated Press, the screen blacked out and images were blurry at times.

Creators said the technology is being fine-tuned but that such glitches aren’t unusual given the amount of wireless data being streamed to the headsets.

The exhibit runs until November. Creators plan to replicate the technology in other museums to recreate the exhibit. Details aren’t finalized.